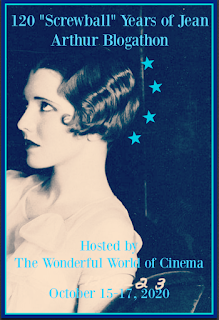 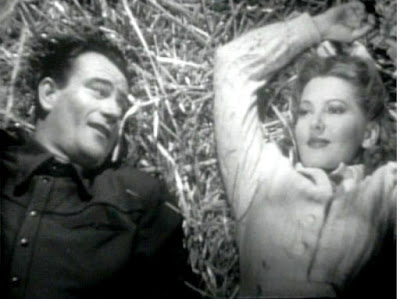 Arthur is a big city girl going on a two-week bus tour of the west—possibly, in part, to get away from her three suitors. She meets Wayne at a rodeo; he falls off his bucking bronco during a competition and onto her. She’s interested in him at first but when he makes his intentions toward her clear, she goes to red alert and puts up her shields (is it me or did Arthur always feel the need to defend her virtue in the movies?). When she catches his softer side, though, she becomes convinced she can win his heart after all.

Arthur gets her moments: drinking beer with Wayne and getting foam on her upper lip; sampling a potent local brew and nearly having her head explode, pulling a Claudette Colbert while trying to hitchhike—all the silly little things that made her so adorable and precious and spunky.

Wayne, four years removed from Stagecoach and still looking youthful and slightly less rugged, gets to do his thing too: getting into a barroom brawl; riding a bucking bronco (or at least his stunt double does); tossing Arthur out a window and onto a bale of hay. His character is actually named Duke, if you can believe it. 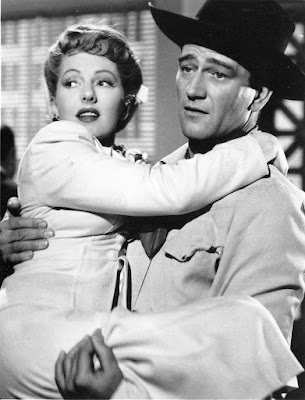 Charles Winninger plays the Gabby Hayes/Andy Devine role as Wayne’s sidekick; I assume his official role is as Wayne’s trainer or perhaps manager. He sees Arthur as a threat to the status quo. He’s clearly jealous of her for stealing Wayne’s attention and Wayne is surprisingly clear as to how he views Winninger: Wayne calls him his “better half,” and when Winninger complains about Arthur, Wayne says “You sound like a wife.” (Imagine him saying that to Andy Devine!)

The opening narration would have you believe what we’re about to see is a modern fairy tale, and I’m willing to indulge in a bit of fantasy in seeing such an unusual duo as Arthur and Wayne fall in love out where the buffalo roam—but the title of the movie would also have you believe she’s the one who will learn to bend a little to get what she wants, when in fact it’s him who makes the big change.

Wayne is supposed to be Mr. Set In His Ways, yet all it takes is one lamb chop dinner (he claims to hate lamb chops) for him to decide that yes, he will give up his lone wolf existence which he says he values so much, ditch his sidekick (which we don’t see), travel 2000 miles, and literally fight off the three suitors to get Arthur back after she was convinced her master plan to win him over didn’t work and would never work. Seriously? 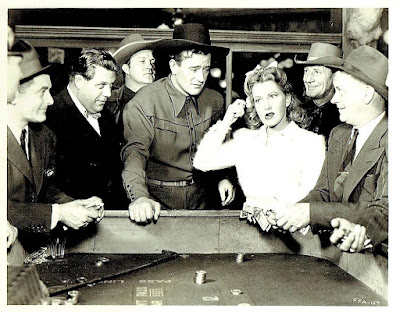 I can tell you from personal experience this sort of thing can happen, but it takes way more time than what we saw. To have him pop up in New York in the final reel, suddenly ready and willing to be what she wants him to be is a cheat. It’s dishonest; human nature doesn’t work that way, and I don’t believe this relationship would last.

Maybe I’m so sensitive to this because Wayne and Arthur play cartoon versions of the characters in my novel, and I’ve spent the past seven years trying to make them more believable than this. I’d rather Wayne and Arthur depart as friends and admit to themselves they’re incompatible. That would be more honest—but no, we gotta have a happy ending. It’s 1943, there’s a war on, and audiences don’t come to the movies to be depressed by “honesty.”

But like I said, Lady is presented from the outset as a fairy tale. Maybe I shouldn’t get so worked up. Besides, we know Arthur leaves Wayne once she realizes he’s not the man for him, because the next time we see her on the prairie, she’s married and settled down with Van Heflin!

Quick postscript: Phil Silvers plays a chatty bus driver. I must have seen him in something before, but I don’t recall where. Anyway, this was long before his self-titled TV show, which I’ve never seen but heard of through other places. He’s more or less how I imagined him.

The Talk of the Town