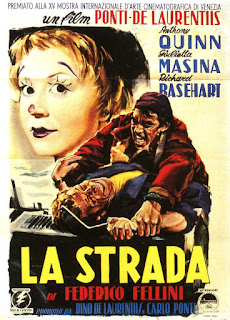 Okay, I know La Strada is a Fellini movie, but can we talk about Giulietta Masina for a minute? The first time I saw her was in Nights of Cabiria and I thought she was terrific in that, but omigod, I think I’ve fallen in love with her after watching her in this one. She is adorable! She has eyes like Joan Blondell, a sweet and endearing smile, and I love that pixie haircut of hers.

And she was an excellent actress. She may not have been a sex goddess like her fellow Italians Sophia Loren or Gina Lollobrigida, but after seeing her as a spunky, worldly streetwalker in Cabiria, she went in the other direction and played an innocent waif of a girl who you just wanted to hug and take as far, far away from Anthony Quinn as possible. Madonna and whore: not exactly an original combination, but what can I say? That’s how I discovered her. 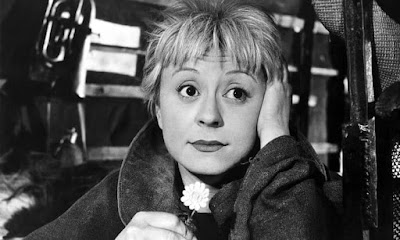 She met Federico Fellini during the war, when she worked as a radio actress; she had appeared in a radio serial of his. Fellini was dodging the draft at the time; during an Allied air raid in Bologna, the two hid in Masina’s aunt’s apartment. Months after Mussolini was defeated, they married in 1943. Three years later Masina debuted, in a Rossellini film.

It was La Strada (“The Road” in English) that made her a star, a film co-written by Fellini. She and Quinn are street buskers. His act is as a strongman, binding himself with a chain and then busting loose—plus a comedy routine with her on the side. They travel to all the villages and towns and at one point they join a circus. He calls her his wife but we never see them get formally hitched. He treats her like crap and she’s not bright enough to realize it; they’re like a dark version of Lucy and Ricky. 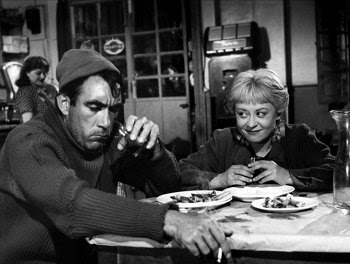 Her innocence, however, keeps you rooting for her and hoping things will work out. Masina’s character reminded me of Emily Watson (no relation) in Breaking the Waves without the religion, or for that matter, the sex: simple-minded woman-child from small village is involved with big, rugged man and her purity of heart redeems him in the end after she is removed from the picture (he said, trying to avoid spoilers), though “redeems” might be overstating it on Quinn’s part. At the least, the film ends with him finally realizing what he had in Masina.

La Strada was filmed without sound; dialogue, music and sound effects were dubbed in later—but apparently this was common in Italian film at the time—so the English-speaking Quinn and Richard Basehart spoke English on the set while everyone else in the cast spoke Italian. Also, no sound meant Fellini could speak during each take. 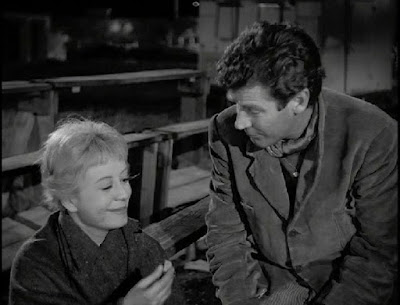 Watching this film felt like looking at a spaghetti western in places. Is Quinn actually speaking Italian? Doesn’t look like it. Wait, go back to that last scene; try to follow his lip movements. What is he speaking? English? Then why is he being dubbed? This sort of thing would frustrate the hell out of me whenever I saw a Clint Eastwood western on TV. Here’s a discussion of sound in Italian post-war cinema on the Criterion website forum.

Though it won the first Oscar for Best Foreign Film, it had a mixed reception when it came out. Also, when Fellini accepted the Venice Film Festival’s Silver Lion award for the film, a fight broke out in the audience. Time has been kind to it though. The Pope digs it.
Posted by Rich at 12:00 PM