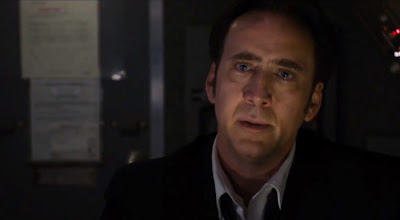 Before I go further, let me make clear that I’m not interested in discussing the theology behind the Left Behind franchise, in either the films or the books. If you know me, you won’t be surprised to learn I think all of that rapture stuff is bullshit, not to mention dangerous, and I don’t want this to be one long rant against organized religion and the charlatans who use it to keep otherwise intelligent people ignorant and passive. I’d much rather talk about Cage. It’s more fun.

Cage, at his best, is an excellent actor who throws everything he’s got into his roles—and yeah, sometimes it seems like he goes way over the top, but give him his due: he’s rarely boring. Fandom Assembled has responded by turning him into a kind of cult figure, with numerous memes and compilation videos and even merchandise.

He’s aware of this and he’s not thrilled about it, so one can’t help but wonder: is he just exploring untraveled paths in acting, a misunderstood genius whose work will one day be truly appreciated by cinema historians? Or has he gone full retard one too many times? 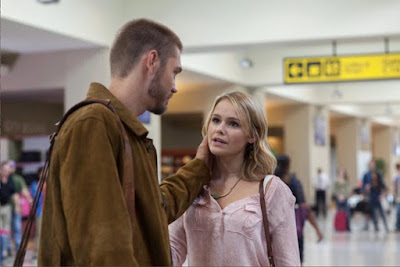 Maybe Left Behind has the answer. Based on a series of books, it’s inspired by the Christian concept of the rapture—God’s faithful being physically called to heaven—and the rest of humanity being stuck on Earth, witnessing everything go down the toilet. Cage, an airline pilot, must safely land a plane full of his fellow non-believers while on the ground, his daughter searches for answers to the chaos.

Cage plays the whole thing straight this time; while his character is flawed, there’s no room in the screenplay for him to be anything other than a normal husband and father, not a vampire or a criminal  or a comic book supervillain—and now that I’ve watched the movie, I think this is one of those rare times where he actually is boring! In his defense, though, he talked like the material genuinely interested him. (My real pity is for childhood movie crush Lea Thompson, who has a small part in this too.)

The script does him no favors. It’s The Ten Commandments meets Airport—one big Irwin Allen-style disaster movie with all the cliches you’d expect, and it’s pretty bland. At first it made me think of that Twilight Zone episode where the plane gets lost in different time periods and can’t find a safe place to land, but the dialogue is awkward, and while it doesn’t preach, neither does it explore the concept of the rapture enough to hold your interest. I don’t think we even hear the word “rapture.” 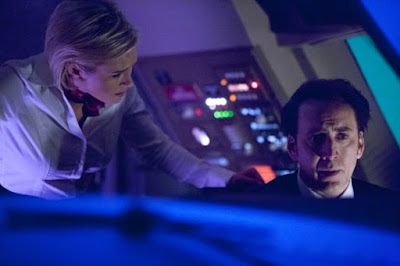 Left Behind has a puny score of 1 on Rotten Tomatoes and it was nominated for three Razzies, including Cage for Worst Actor, but I honestly didn’t think his acting was that horrible. It just wasn’t that interesting. This movie is actually a remake of a smaller-budget adaptation starring Kirk Cameron, from that 80s sitcom Growing Pains. He grew up to become an evangelical Christian, hence his involvement with this franchise. I’m willing to bet his version is worse, but there’s only so much cinematic self-flagellation I can endure.

I think there are Oscar-winning actors who should surrender their statuettes for crimes against film. Cage isn’t one of them. His career turned the way it did only because he blew all his money on crap and got in Dutch with the government. If that hadn’t happened, he might have made more good-to-great films. After his Oscar, he made, among many others, Bringing Out the Dead with Scorsese, Adaptation with Spike Jonze and Charlie Kaufman, and recently, Mandy, which got excellent reviews. Here’s hoping more such films are in his future.

——————-
Other “so bad it’s good” movies (a partial and subjective list):
Plan 9 From Outer Space
The Room
Troll 2
Manos: The Hands of Fate
Santa Claus Conquers the Martians
The Rocky Horror Picture Show
Posted by Rich at 7:00 AM