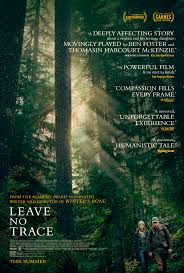 My instinct is to reply hell yeah, if I thought I could abandon civilization and live in the woods, or up a mountain, or on a desert island, I would. People suck (well, not you) and if I believed I could live completely on my own, away from their cell phones played on buses, their car alarms, their two AM parties, etc., not to mention their racism, greed and stupidity, I'd do it. My instinct is to say that.

The truth, unfortunately, is that I couldn't last one day in the wilderness for soooooo many reasons: I don't know how to hunt for food. I don't know how to start a fire. I couldn't identify edible plants to save my life. I would sooner run like hell from a wild animal than try to kill it. Not to mention I actually have a few good reasons to remain in civilization, such as a woman I've grown to love and would miss dearly. Couldn't say that a year ago. 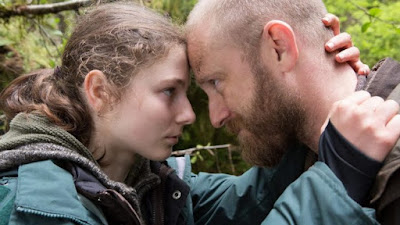 There's a reality show my mother watches, Zod knows why, in which people are thrown into a forest and are forced to survive for a couple of weeks, I think, eating nuts and berries, making their own shelter, avoiding wild beasts, etc. Did I mention they have to do this completely naked?

There's a similar show she also watches that's set in the wilderness of Alaska. It's less extreme, but it's also about survival without many of the creature comforts of modern life. 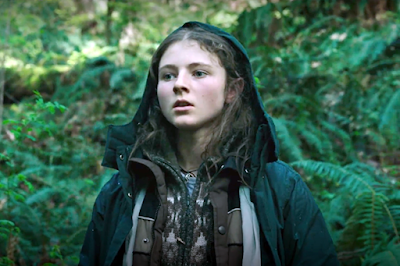 Whenever I happen to see it, I'm reminded of my friend Layla, who does live in Alaska, but not in an igloo or anything like that. Still, she'll post pictures of nature on Facebook and joke about how cold it can get up there, even in the summer. Once she posted a video of a moose that crossed the highway in front of her!

Civilization, ultimately, is much more good than bad, but certain kinds of people can do without it, given a choice... and then there are those who don't have a choice.

Leave No Trace is about a father and teenage daughter who live in the woods of the Pacific Northwest. Why? At first, it seems as if it's because the father is just plain fed up with the modern world and the daughter is along for the ride. When they get caught, though, and are forced to return to civilization, it becomes clearer that the reasons are deeper than that. 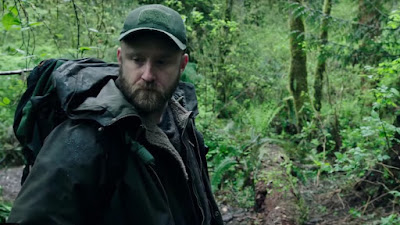 Co-writer/director Debra Granik caught lightning in a bottle with Best Picture nominee Winter's Bone, and made a superstar out of Jenny Lawrence. At long last, Granik has made a follow-up, and I'd say it was worth the wait.

Like the work of Kelly Reichardt (I was reminded of Wendy and Lucy in particular), Trace is spartan in both pictures and words, relying on the audience to fill in the gaps and draw their own conclusions. Is Ben Foster's character a bad father? He raises his child apart from the modern world, but he does a really good job of it; she's intelligent and is fully schooled in her father's survival skills. 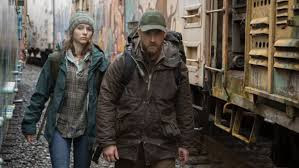 Would she be better off in a normal home with normal caretakers, though? That's part of the movie's dilemma, and Granik, with co-writer Anne Rosellini (adapting a novel), takes her time providing the answer. The issue is never as simple as one might think.

Granik provides lots of nice shots of the forest, and gets solid performances from Foster and newcomer Thomasin McKenzie, who no doubt must be sick to death of the Jenny Lawrence comparisons by now, so I won't make any.

Trace is thoughtful, character-driven and off-beat in a good way. Well worth a look.
Posted by Rich at 3:45 PM