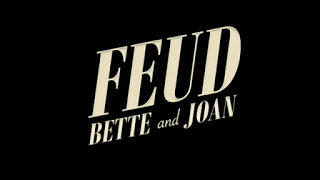 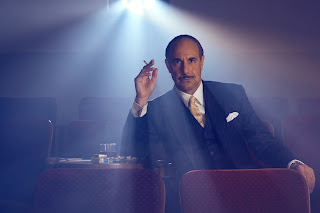 Daughters are this week's theme. We meet Joanie's twin daughters for the first time. Christina is implied but not seen. When the twins go away for the summer, Joanie endures a little empty nest syndrome. Bette, meanwhile, consents to put her daughter BD into the film at Aldrich's suggestion, but she is not the thespian her mother is.

Before we get to the principals, let's show a little love to Judy Davis as Hedda Hopper. Between the excessive makeup, the wrinkles and the outlandish hats, Davis, a lovely woman normally, looks like an old hag here. Her role as gossip-monger and confidant to Joanie is shaping up to be crucial. On the one hand, she's eager to offer Joanie a shoulder to cry on, but it's only because she smells blood in the water on the Baby Jane set. All she really wants is to take a bite. It's the kind of role Davis specializes in: catty and full of false sincerity.

I had no idea Bette had children. Kieran Shipka plays BD with a certain innocence that's endearing. Her best moment so far was in Part 2, when she calls her mother on wanting fame as much as her rival Joanie.

Seeing Bette depicted as a single, working mother adds a new dimension to her for me. I had always imagined her as almost a force of nature, but she had many of the same vulnerabilities as other women. One can't help but be reminded of what she says in All About Eve about being a woman: "That's one career all females have in common.... Sooner or later, we've got to work at it."

As for Joanie, she elicits much sympathy for missing the feeling of motherhood, to the point where she even tries to adopt again in this episode, but we all know what kind of mother she really was. It's hinted at in the opening scene with the twins, as well as in her scene with Bette over dinner as they share their family histories. Ryan Murphy and his writing staff know better than to compete with Mommie Dearest (which I've never seen either), so they come at Joanie's motherhood from a slightly different angle, which is smart.

I'm afraid I don't know anything about Victor Buono beyond his IMDB bio. Dominic Burgess plays him here, and he gets a moment where his homosexual proclivities almost get him in trouble off the set. I'll have more to say about Baby Jane as an iconic gay camp movie when I write about it, but I'll say here it was good that the writers had Bette acknowledge her gay audience.

From the tidbits of Baby Jane I've seen throughout Feud, I'm not entirely sure what to make of it. Is it really a horror movie? It doesn't look like one, although Bette in that kabuki makeup and ridiculous blond wig is frightening enough. We got lots of scenes on the set this week. They were funny. Loved the part where Bette and Joanie argue about who should have won Best Actress in 1950, the year of Eve.
Posted by Rich at 10:15 AM