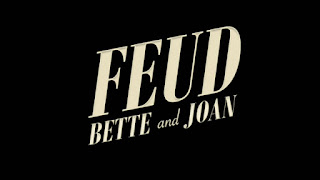 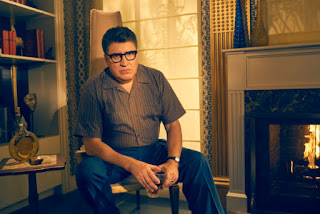 Robert Aldrich, feeling pressure from all sides to capitalize on the enmity between Bette & Joan, stirs the rumor mill, with predictable consequences. Alfred Molina, as fine an actor as he is, never struck me as a romantic lead, yet he's holding his own in Feud, soothing the fragile egos of his Baby Jane co-leads even as he's forced to exploit their mutual scorn for each other. The scene where he and Susan Sarandon rehearse Baby Jane's song was shot well, following their gestures and emphasizing their physical closeness.

An advantage to telling this story as a TV mini-series is how peripheral characters are able to get their moments. In part 2, we see Aldrich's wife and Bette's daughter express crucial points of view. That was a pleasant surprise. The final scene was also composed well, with Aldrich's wife in the foreground, in bed, pretending to be asleep as her husband stirs in the background, literally turning a blind eye to his activities. Ryan Murphy has a good eye for angles, and it shows throughout this series so far.

Jessica Lange's Joanie is so needy! Watching her in this story, we're reminded of how movie stars feed on the adulation we, the fans, happily give them. Some of them can keep it in perspective. Joanie can't seem to, however. It makes you wonder how much of her rivalry with Bette is all in her mind, given her insecurity and her need for validation.

Sarandon's Bette, on the other hand, comes across as the more grounded of the two at first, until that scene with her daughter reveals the truth: Bette is just as hungry for the spotlight as Joanie, and it's damaging her relationships with her loved ones to the point where the only one she can turn to for comfort is her director, Aldrich. Again, I don't know how much of this is real and how much exaggeration, but it makes for great drama.
Posted by Rich at 11:15 AM