Yesterday, I attended a very special event - a festival celebrating the anniversaries of the two World's Fairs held in New York: the 1939-40 Fair and the 1964-65 Fair. Both Fairs, as well as yesterday's festival, were set here in Queens, at Flushing Meadows Corona Park, across the street from CitiField and the 7 train, home to tennis' US Open and repository of many childhood memories.

I played and hung out in Flushing Meadows a lot as a kid, and though I had a vague awareness that it was home to the World's Fair, it existed only as something from the dim and distant past, long before I hit the scene. Naturally, I saw the relics of the Fair - the Unisphere, the New York State Pavillion, the Terrace on the Park - but to me, these were just cool looking objects that were part of the park, like slides and swings were part of my grade school park.

This year, I've had cause to re-examine Flushing Meadows from a historical perspective. For instance, the Museum of the Moving Image currently has an exhibit featuring clips from promotional films for the '39 and '64 Fairs. Seeing the park from the context of the Fairs, as part of a worldwide attraction that was visited by tons of people, was exciting. I especially liked seeing the Unisphere being built. A giant steel globe tilted at an axis and mounted on a base, the Unisphere was built for the '64 Fair and has since grown to represent Queens in general, but once upon a time it had a much larger significance, and now I feel a bit more aware of that.

At yesterday's festival, there was a wide variety of music, food, park-related exhibitions, art, and more that commemorated the past and celebrated Queens in general. The Pavillion, a giant circular structure which has since fallen into disarray since its construction for the '64 Fair, was open to the public, and I had the distinct pleasure of walking around inside it for the first time ever.

You've gotta understand - in all the years I've been to Flushing Meadow, playing in it with friends as a kid and hanging out in it as an adult, I've always taken the Pavillion for granted. I knew next to nothing about its history other than that it was once part of the Fair. It meant little to me - for a long time, I didn't even know what it was called - and now, to have been inside it and to fully grasp its significance... it was quite a moment. (Incidentally, there's a movement afoot to save and preserve the Pavillion.)

On top of all this (though by pure coincidence), I'm currently reading the true crime book The Devil in the White City by Erik Larson, the story of a serial killer who operated during the Chicago World's Fair of 1893 (great book!). So it's safe to say that I've had World's Fairs on my mind lately. With that in mind, I thought I'd take a look at five examples of how they've been depicted in movies.

- Meet Me in St. Louis. Might as well start with the best known one. The St. Louis Fair of 1904 was the Louisiana Purchase Exposition, commemorating the centennial of the notable land deal with France that gave America much of its Midwest. Among the highlights included a large bird cage, the world's biggest organ (at the time), a wireless telegraph tower, and a concession devoted to the Anglo-Boer War. Dr. Pepper and Puffed Wheat cereal debuted at the fair.

Meet Me in St. Louis was, of course, inspired by the song "Meet Me in St. Louis, Louis," which is in the movie. Judy Garland is radiant, and the songs she sings, such as "The Trolley Song" and "Have Yourself a Merry Little Christmas," have become American standards. Could've done with a little less Margaret O'Brien, but otherwise it's an all-timer.

- It Happened at the World's Fair. Seattle is the setting here. They had their Fair, the Century 21 Exposition, in 1962, during the "Space Race" with the Soviet Union, and science & technology was a major motif. The Space Needle was constructed for the Fair and has since become the symbol of Seattle in general. In addition, the Monorail and the sports facility now known as the KeyArena were built for the Fair.

It Happened at the World's Fair was an Elvis movie, made after Jailhouse Rock but before Viva Las Vegas. He sings a song called "Take Me to the Fair" on a ukelele to a kid. There's a scene in the Space Needle, of course. It's also Kurt Russell's debut film, back when he was a child actor. He kicks Elvis in the shins! 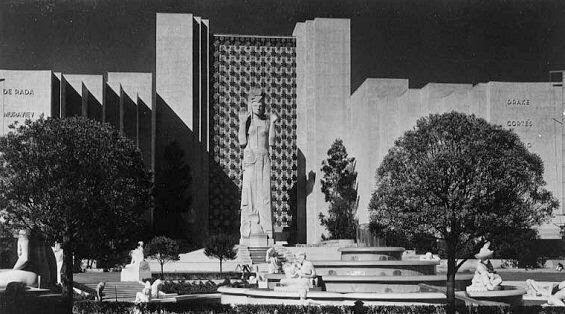 - Charlie Chan at Treasure Island. San Francisco's Golden Gate International Exposition was held in 1939-40 (the same years as the New York Fair) on Treasure Island, an artificial island built for the Fair. The Bay Bridge and the Golden Gate Bridge were relatively new at the time, and the island is where the two spans meet. The Pacifica statue, an 81-foot sculpture of the goddess of the Pacific Ocean, was the symbol of the Fair.

The 22nd Charlie Chan movie (and the third featuring Sidney Toler as Chan), he heads out to SF during the Fair to investigate the death of a friend. Was it suicide - or murder? There's real footage of the fair, including aerial shots, in the film. Some say the Zodiac killer was inspired by this film to go on his killing spree. Plus, a young Cesar Romero. 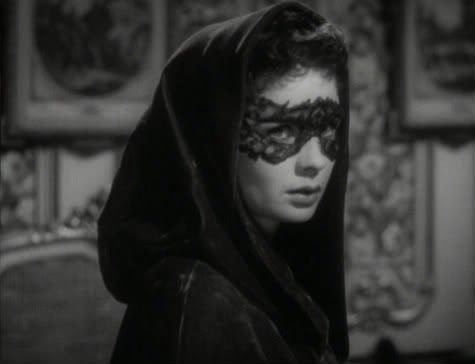 - So Long at the Fair. Paris' Exposition Universelle was held in 1889 and it gave the world the Eiffel Tower, named for its designer, Gustave Eiffel, and though people were less than thrilled with it at first, it would go on to become world famous and synonymous with Paris, and indeed, France itself. Buffalo Bill and Annie Oakley performed there as part of their Wild West Show.

So Long at the Fair is a Jean Simmons movie in which she searches Paris during the Fair for her missing brother, whom no one acknowledges as ever having been in Paris - even though he was. It's allegedly based on an urban myth. The title comes from a lyric to a popular song at the time. 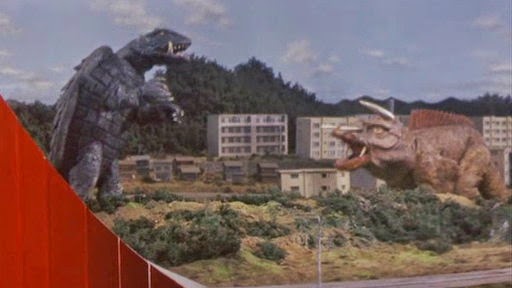 - Gamera vs. Monster X. Expo '70, or Osaka Banpaku, was held in Osaka, Japan in 1970. IMAX debuted there. A moon rock from the Apollo 12 mission was on display, as were mobile phone prototypes. The Landmark Tower was built for the Expo, as was the Tower of the Sun, a structure with three human-like faces on its facade, moving staircases and an artificial tree inside. It inspired a song by Shonen Knife.

Even a Japanese monster movie has a Fair connection! Gamera is basically a giant turtle. He debuted in 1965 and there have been twelve films in the series (so far; now that the new Godzilla seems to have done well, I'm sure it's only a matter of time before we see him again). Gamera vs. Monster X (AKA Gamera vs. Jiger) was actually filmed at the Expo. It sounds like a cheaply made kiddie film, but I'm sure it's loads of fun.
Posted by Rich at 6:56 PM