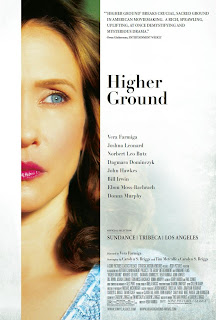 Last month I talked about how Andrea was spending this summer going on a European cross-country hike. I haven't mentioned why. Hers is no ordinary hike. It's a popular trek called the Camino de Santiago, which is a network of trails that traverse through Portugal, Spain and France. It's also a Christian pilgrimage that has existed for over a millennium. The goal is to reach a Spanish cathedral that allegedly is the final resting place of St. James the Great. Andi is deeply religious, and she sees this journey as a way to reconnect with her beliefs. She was convinced that this was something she needed to do now, while she still could, since she had put it off for years. From her surprisingly frequent Facebook updates, she sounds like she's having the time of her life.

She and I have had religious discussions in the past. She's absolutely not the type to push her beliefs on anyone, nor is she prone to spouting dogma of any kind. In fact, she's as anti-dogmatic as one can get: she takes what she needs from more than one source and applies it to her own life. She feels as much at home in a church as in a synagogue. 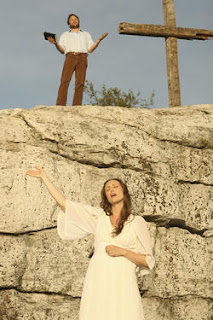 I wish so much that she could have been with me to see the movie Higher Ground. We would've had a great deal to talk about afterward. She always likes talking about movies afterwards - I mean really pouring over them - but this is the kind of story she would've analyzed forwards and backwards. The directing debut of Up in the Air and The Departed actress Vera Farmiga, it's based on a memoir about one woman's struggle with religion throughout her life in a small town. From childhood, she was taught to fear and love God, and she becomes a true believer, but the more she experiences life, the more she encounters doubts about her faith.

Without getting too specific about it, because some things are simply too personal even for this blog, let me just say that I know what it's like to be programmed with religious dogma practically from birth, only to question it later in life. In the movie, we see Corinne, Farmiga's character, as a child, encouraged by her pastor to accept Jesus into her heart, but it's clear she only does it because she believes it's what's expected of her. I understand why parents would want to indoctrinate their kids into their faith, but from the kids' point of view, it's not like they're given much of a choice. I sure wasn't, I can tell you that much, and I've never felt anything resembling a "divine" presence in my life, even though I went through the motions. 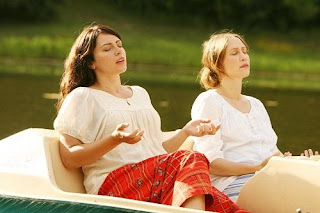 I can't help but think of the writings of the scientist and staunch atheist Richard Dawkins, whose work I discovered a few years ago. He devotes an entire chapter in his book The God Delusion to the issue of raising children within a faith. One of his big pet peeves is how people use the phrase "Christian children" or "Jewish children" or "Muslim children," as if to imply that the children chose to follow these faiths. Dawkins would rather have people say "children of Christian parents" or "children of Jewish parents" because the implication there is that the child has not consciously chosen; indeed, that he or she is too young to make an informed choice as to what faith to follow, if any. I found that to be a powerful and empowering statement when I first read it, because if I had been given a choice as a child, my life would've been quite different.


Higher Ground was more than a little reminiscent to me of Robert Duvall's masterpiece The Apostle. Both films are directed by their respective stars, and while the journeys their characters take are different, they're both portrayed as struggling with their relationship with their god after a lifetime of service and unquestioning faith. In Corinne's case, it almost seems like her path could follow that of the Apostle's - she becomes attracted to other methods of worshiping God that fall slightly outside the boundaries of her small congregation - but she's constrained by her gender; there are scenes where congregation members make it clear to her that it's the men who lead and the women who follow.


The movie, however, also made me recall Blue Valentine, because of Corinne's relationship with her husband Ethan. They marry young, full of passion (they embrace religion when their infant daughter almost dies), but the older they get, the harder it is to sustain that passion. Indeed, one of the subplots of the film deals with the lack of sexual activity not only in their relationship, but in that of other couples in the congregation. One scene shows the men listening to a cassette tape that offers frank sexual advice for Christian couples, and you can imagine their initial reaction. I was even reminded a little bit of Rachel Rachel in that Corinne is also a middle-aged woman in a small town approaching a critical crossroads in her life - and that movie uses religious faith as a subplot, though Joanne Woodward's character is much more skeptical about it. 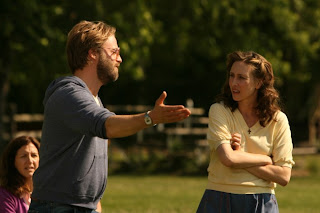 Andi has told me that while she feels something she believes to be a divine presence in her life, she admits she could also be mistaken. Still, she feels compelled to heed it and to follow it wherever it takes her - even across an ocean and hundreds of miles through a foreign country. I realize how this could sound to some, but as someone who knows her fairly well, I can assure you she does not come across as delusional in any way. Her faith operates on a much more individual level than most, and while I no longer believe, I can respect that a great deal more than those who feel the need to advertise their faith, to wear it on their sleeve and make sure you and everyone else knows about it. A part of me sometimes wishes I had what she has... but even if I never do, I can't deny that she's a better person because of her faith.


Still, though, that's her. I certainly do not feel I have the right to tell her or anyone else that having spiritual beliefs is wrong if it fulfills their lives, though I do believe one does not need religion to be a good person. Either way, religious faith should be a personal choice - to have it or to not have it - and it shouldn't be pushed on anyone against their will, not even - especially not even - children.
Posted by Rich at 12:41 PM