Is comedy always better with an audience?

So Sandi and I were discussing Knives Out, the new murder mystery, and she confirmed for me what I was uncertain about at first: it is meant to be a comedy. When I told her neither I nor the audience I saw it with found it that funny, even though I still enjoyed the film, she was all “Whaaaaat? But what about so-and-so and such-and-such a scene” and I agreed they were amusing, just not the laugh riot she and her audience thought it was. And that got me thinking...

I think we can agree that not all comedy is created equal. There’s the traditional pie-in-the-face gags of slapstick, which never really goes out of style. There’s the wacky, almost non-sequitor-like wordplay found in the Marx Brothers or Monty Python. There are sex jokes and innuendo, like you’d find in Benny Hill or the Carry On films. There are the more highbrow comedies based on class distinction, that Oscar Wilde dealt in, and the ones based on race or gender, like the humor of Chris Rock or Sarah Silverman. You get the idea.

Regardless, I had always believed experiencing humor with an audience had a way of amplifying the jokes, making them more enjoyable than if you were alone, but that’s not entirely true, is it? Duck Soup is hilarious whether you see it with other people or not; so is Annie Hall. Two different types of humor, yet both hold up as examples of funny movies—at least according to critical reception, box office success, and their places in film history, markers which are about as objective as you’re likely to get—with or without an audience. 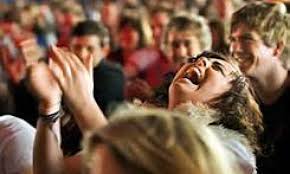 Knives currently has a 96 on Rotten Tomatoes. Among the words and phrases used in the reviews include “black humor,” “funny shenanigans,” “witty,” “a ‘toon” (as in cartoon), and “nuttiness.” So why didn’t I or my audience chuckle along at the same pace as Sandi and hers? And once again, let me reiterate: I enjoyed the movie very much. It’ll likely make my Top 10 for the year.

When you go to the movies, you can’t control who sees it with you. The audience may consist of riotous fans who cheer in all the right places or sourpusses who sit on their hands for two hours. They may expect a great movie but end up disappointed, or vice versa. The question is: how much does their reaction determine your own?

Audiences are fickle; we know that. This stand-up comic, in blogging his belief that humor is not subjective, discussed the right brain (creativity) versus left brain (intelligence) conflict in analyzing their reactions:


...I’d imagine it is the left side of the brain that writes clever material – the right side that performs it. Comics lacking in the former are usually very charismatic and charming, but say nothing original or intelligent or surely and sorely lack the surprise element in their punch lines. Those lacking the former are probably very cerebral on stage, though relatively void of character and ability to truly captivate. It stands to reason that audience members that appreciate comedians whose acts largely favor one side are lacking one side in themselves, thus intellectually inferior to an audience member sitting there wishing this ball of energy would say something interesting, or that this clever-ass nerd actually qualified as a “performer.” Obviously the best comics do not lack expression from either brain’s side.

On the other hand, this SlashFilm editorial states not only is comedy subjective, it should alter how we judge them:


...when it comes to comedy, we tend to judge based on one thing: did we laugh? The problem with reviewing comedy is there’s no middle ground. In other genres, it’s easier to pick things apart and appreciate certain filmmaking aspects, but it’s rare to leave a comedy thinking “that cinematography was magnificent”. There are exceptions, but ultimately, it comes down to laughs.... The problem with judging a film solely on laughs is that everyone has a different range of what tickles their funny bone, and it can be a fine (and weird) line. 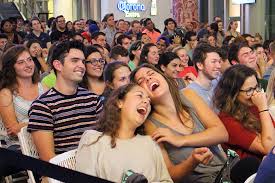 In addition, here’s a more scientific study of humor and why it works on us the way it does.

I went into Knives expecting more than just LOLs. I knew it was satirical, I knew it had something to say about the modern world, and I expected good acting (Daniel Craig, Jamie Lee Curtis, Chris Evans, Toni Collette, Michael Shannon, Don Johnson, etc.)—and in that sense, I wasn’t disappointed. I also appreciated the intricacy and unconventional nature of the plot. I probably wouldn’t expect such things from, say, a Will Ferrell movie. Does the average moviegoer make that distinction?

I should hope so, but as the SlashFilm article pointed out, sometimes we go into a film with the wrong mentality. We miss things we should’ve picked up upon. That’s happened to me, and I’ll bet it’s happened to other regular moviegoers too. I might doze off or miss a scene some other way and then I’ll wonder what’s so funny about a later scene because I missed the context. I had to go to the bathroom during Knives, and I missed almost ten minutes of screen time because I had to walk a long way to the bathroom, on another floor! (I figured out what I missed, but you see my point.)

Ultimately, I wouldn’t blame such factors for why I didn’t laugh at Knives. Sometimes there is no rational explanation... because I do believe humor is subjective. It may seem like audiences react as one to something funny or unfunny, but they don’t—and positive or negative, not everyone out there in the crowd is going along with the tide.

—————————
Related:
When comedies offend audiences
Comedy is serious business
Is the only good comedy a raunchy one?
Alone at the movies?
Posted by Rich at 7:00 AM