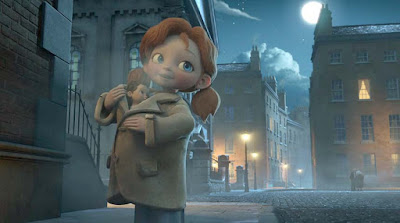 Angela’s Ashes is one of my most cherished books and Frank McCourt is one of my most beloved authors. The vividness of his descriptions, the way he created a narrative voice and sustained it, his sense of humor, his empathy for his characters, made him a treasure to read, and still does. Plus, he became a literary star late in life, which provides hope for this aspiring writer.

In 2007, two years before his death, McCourt wrote his first and only children’s book, Angela and the Baby Jesus, which could be considered the prequel to Ashes. It’s based on a story his mother, Angela, told him as a kid about when she was a kid, set during Christmas. In 2017, Netflix and Ireland’s Brown Bag Films adapted the story into a 30-minute animated short, Angela’s Christmas. Malachy McCourt, Frank’s brother and a bit of a celebrity himself, narrates and Ruth Negga voices Angela’s mother. The late Dolores O’Riordan of the Cranberries performed a song.

In 1910 Limerick, Ireland, young Angela is about to celebrate the Christmas season at church with her family. She sees a doll of the baby Jesus on display in its traditional tableau, with Mary and Joseph, in the stable, etc., and being a child, thinks He must be cold. She secretly steals the doll and takes it home to warm it up, only to discover why what she did was wrong from her mother. Director Damien O’Connor, in this interview, discusses the meaning of the story to him:


The story is ultimately about family with warmth representing love. That connected into everything - visually you have the blue and gold in almost every shot with gold representing love. As Angela moves through the story she moves from the cold blues into the warmth, eventually ending up fully basked in the gold heat of the family fire. Once you have the theme then you have a clear path for the writing, if a scene was not working in the script it was usually because we strayed from the theme.

Frank McCourt fans will recognize the Limerick represented here as the one from his childhood as depicted in Ashes: devoutly Catholic to the point of superstition, yet basically warm-hearted and sentimental like many people at Christmas time. The computer-generated animation is splendid; Angela is wide-eyed and innocent, yet with a soupçon of Irish sassiness. I like the interaction with her brothers. Negga as the mother adds exactly the right touch. Absolutely worth viewing whether you’re Catholic or not.
Posted by Rich at 7:00 AM