The Battered Bastards of Baseball I’ve seen quite a bit of minor league baseball, maybe as much as major league ball. Here in New York we have at least three minor league teams I know of, such as the Brooklyn Cyclones, who play in Coney Island, right on the boardwalk next door to the amusement park. Last year I took Virginia to a game. When I lived in Columbus, we had the Clippers, and I saw games both in their old stadium and in their newer one, closer to the downtown. I’ve seen games in other towns, too.

From a fan’s perspective, the game looks the same. The fastballs aren’t as fast, and the home runs not as big, but it still takes three strikes to get a batter out and three outs to end an inning. The big difference might be in the entertainment factor. The minor league teams work overtime to please the crowds with between-inning games, mascots, promotions, even cheerleaders. I was about to say they do it to a greater degree than the majors, but it’s been so long since I’ve been to a major league game I can’t judge.

When a labor strike cancelled the World Series in 1994, it shattered my faith in baseball for a long time, but I couldn’t stay detached from it forever. The minors, though I didn’t necessarily look at them this way at first, seemed like a reasonable compromise: a way for me to enjoy the game I loved as a kid without thinking about the things that ruined the game at the major league level for me: labor disputes, steroids and other drugs, contract negotiations. I know the minors aren’t immune to such things, but at least they’re less magnified. If a Cyclone star player doesn’t report to training camp, it doesn’t make the back page of the Daily News.


I forget where I first heard about the Portland Mavericks. Maybe I read about them in Sports Illustrated, maybe it was in a book somewhere. Might have even been online. (I lurk in some Facebook sports groups from time to time, especially this year, when I wanted to learn more about the ‘69 Mets.)

Whatever I learned, though, it wasn’t much, so the Netflix documentary The Battered Bastards of Baseball came pretty much as a revelation. It came out in 2014; it’s the story of the Mavericks and their brief but thrilling history during the 70s as an independent—that is, one unaffiliated with any major league club—at a time when there were no other minor league indies.

Lest you think this is just of interest to sports fans, there’s a substantial Hollywood connection, beginning with the Mavericks’ owner, actor Bing Russell. As an actor, his career stretched back to the 50s, alternating between TV and film. Perhaps his best-known film role was in The Magnificent Seven, if only in a secondary role. On TV, he made multiple appearances as different characters on shows like The Big Valley, Death Valley Days and The Virginian, among others, but it was as Sheriff Foster on Bonanza that he made his mark. 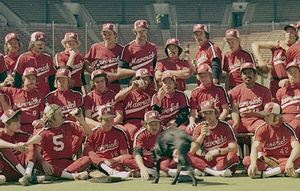 Russell’s great love, though, was baseball. BBB tells how he became involved with it as a child and how that initial passion for the game stayed with him and led him to Portland in 1973—a city that had lost its Triple-A club due to declining ticket sales—and reignite interest in baseball by doing the unthinkable: forming a Single-A team from castoffs, has-beens and never-weres and have them compete in the Pacific Coast League, against genuine professional baseball prospects.

Among the players was Russell’s son Kurt. Yes, that Kurt Russell. Before he was Snake Plissken and Jack Burton and other action movie heroes and villains, he was a child actor. In 1963, he starred in a series called The Travels of Jaimie McPheeters, that lasted a single season, then he popped up in various TV and film roles. Perhaps you remember him from a Disney film called The Computer Wore Tennis Shoes? Anyway, he played several seasons in the minors for several teams. Here are his stats.


Actor-turned-director Todd Field, who helmed the Kate Winslet drama Little Children and the Best Picture nominee In the Bedroom, was a batboy on the Mavericks. He, Kurt Russell, and other ex-players, staff and Portland journalists appear in BBB to discuss not only the team, but Portland and its bone-deep connection to the team, as well as professional baseball’s negative reaction to the Mavericks’ unexpected success. (Field was attached to direct a dramatic version of BBB, but that was back in 2014 and obviously nothing’s happened yet.)

Another, less likely Hollywood connection to the Mavericks is one of my personal baseball heroes, the late great Jim Bouton. A former Y-nk— during the twilight of their dynasty years, his 1970 memoir Ball Four chronicles his ups and downs playing for two big league teams in 1969, one an expansion club, but it is so much more than that. It’s about being an underdog in life and not only surviving, but thriving, after a fashion. Filled with colorful and memorable characters, it had punctured many of the commonly-held myths baseball told itself and its fans for years about the wholesomeness of the game, which had gotten Bouton in a lot of trouble with professional baseball and its overlords. Even if you’re not a fan—maybe especially if you’re not a fan—I highly recommend this book.


Anyway, as an actor, he’s perhaps best known for his supporting role in Robert Altman’s The Long Goodbye. If I saw it, it was long ago, so I don’t remember how he is as an actor. As a Maverick, he joined the team in 1977, convinced he still had something left in his arm at the age of 37. In an afterword to Ball Four, he described his experience with the club:


...Whenever the opposing pitcher got knocked out of the game (which was often), the Mavericks, resplendent in red uniforms with black trim, would stand in front of the dugout and serenade the departing player. It was always the same tune, a loud chorus of Gene Autry’s closing theme, sung with a smirk. “Happy trailllls to youuuu, until we meet againnn. Happy trailllls to youuuu, keep smiling until thennn.”

One night an umpire came over to our dugout (umpires were always coming over to our dugout) and said we should knock it off because we had too much class for that. To which one of our players responded, “Oh yeah! Who says?” I’m embarrassed to say I enjoyed every tasteless minute of it....

Regrettably, his time with the Mavericks cost him his first marriage (he would remarry later), but it did lead to him getting picked up by Ted Turner’s Atlanta Braves the next year.

BBB is an exciting and inspirational story of a professional baseball team that played to win, but also played to have a good time, and in the process, they forged a bond with their fans and their city which was utterly unique and genuine. They were winners too. You could look it up.
Posted by Rich at 7:47 AM