Dolemite is My Name 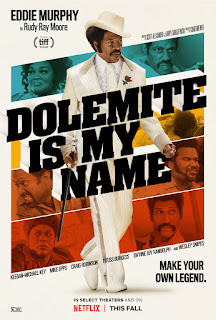 Dolemite is My Name
Netflix viewing

I would’ve been fifteen years old when I went to see Eddie Murphy’s concert film Raw. As I recall, someone recommended it to me. I was still getting used to seeing films by myself, and somewhere along the line I realized I could get into R-rated movies, despite them being technically verboten for me, thanks to my size, which made me look older, and lax ticket booth clerks.

And I wanted to see this one. Eddie was the reason I stayed up late on weekends to watch Saturday Night Live. Stand-up comedy was a new concept for me. I only knew Eddie’s predecessors—Bill, Richard, Redd—through the safe lens of television, both live-action and animated.

SNL was different. It came on late at night; that right there made it seem illicit, almost dangerous. The cast might do or say something... naughty! And Eddie, in particular, walked that tightrope in skits that were not only hilarious, but spoke to me in a way unlike Joe Piscopo or Billy Crystal, funny as they were too.

So why wouldn’t I want to go see him uncensored? I was too young to have seen 48 Hrs. or Trading Places and I only knew Beverly Hills Cop through the soundtrack, so this was a golden opportunity, and I took it—and I never regretted it. Eddie was part of that wave of black superstardom that swept through pop culture in the 80s: Michael and Prince and Whitney in music, Magic and Kareem in sports, Bill on TV. Everybody knew them, everybody loved them. It was a renaissance. 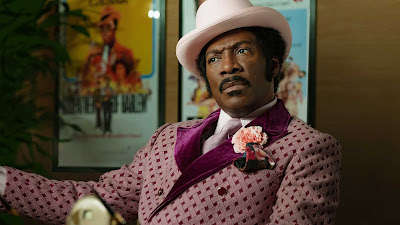 Eddie got older, his edges got sanded off and his image became more family-friendly. Political correctness cast his brand of humor into an unfavorable light by some. I had feared the Eddie of yesteryear had faded into memory.

Now, though, he’s made a movie that feels like the Eddie of old. Dolemite is My Name is a biopic of another of Eddie’s comedic forebears, Rudy Ray Moore. He got big through blue comedy records sold to black audiences, but he never broke through into Hollywood via television shows like Sanford and Son or I Spy. He had to carve out a niche for himself by taking his most popular character, the pimp Dolemite, and put him in a movie he made on his own. Eddie stars in DIMN as Moore during this pivotal period in his life.

I should say that I’ve seen Dolemite and I was less than impressed. Like The Room or Troll 2 or Manos: The Hands of Fate, it’s a trainwreck of a film with awful acting, unconvincing directing and uninspired dialogue, but like those other films, it inspired a cult following due to its so-bad-it’s-good sensibility. DIMN was co-written by Scott Alexander & Larry Karaszewski, screenwriters for another film about a bad filmmaker who made good, Ed Wood.


Eddie as RRM is audacious, filthy, and brash, yet determined and positive too, which brings up a point: if Eddie’s career was directly influenced by RRM, why don’t I find RRM as funny as Eddie? Well, I believe Eddie’s a better comedian. RRM’s shtick consisted mostly of dirty rhymes filled with sex and violence. That may have went over better with me when I was a teenager listening to Andrew Dice Clay, but not as much in middle age. And yeah, once again a part of me feels a twinge of guilt for not liking something so popular with other black people, but you know what? The hell with that. I define blackness my way, no one else’s.

Like Ed Wood and The Disaster Artist, the filmmaker in DIMN (RRM is the Dolemite producer as well as the star, and DIMN depicts him as the de facto creative force, though others wrote the screenplay and directed) is seen as the one who believes in the movie no matter what, even in the face of opposition and creative incompetence. RRM is closer to Wood than to Tommy Wiseau, though, in that he made the cast and crew want to be part of the production. He wasn’t a my-way-or-the-highway type. DIMN director Craig Brewer, of Hustle and Flow fame, places less of an emphasis on the slapdash nature of the filmmaking, though; this feels more like a celebration of RRM’s career as a whole, including his stand-up days—a big difference from Wood. 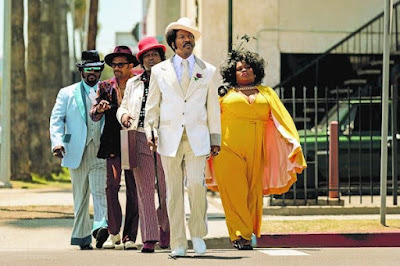 Eddie has big plans for next year. I hope they turn out well for him. I don’t think he’s washed up by any means, and DIMN is proof of that. The younger generation needs to be shaken out of their over-sensitive PC mentality and be reminded that it’s okay to laugh at ourselves. Maybe Eddie can be the one to do that.