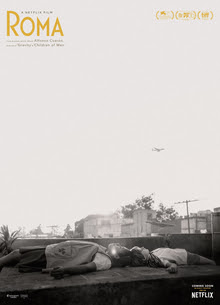 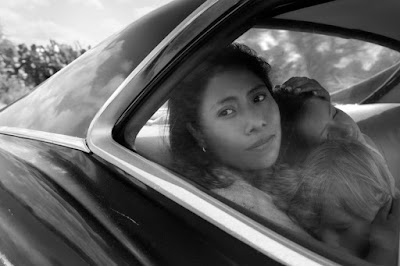 I haven't talked in depth on Netflix because I don't subscribe to it, but it's past time I said a few words. In the past few years, original Netflix films have gotten some major Oscar love even though most of them don't get theatrical runs. Netflix releases entire "seasons" of their original television series all at once, encouraging "binge-watching" in one night. They've changed our relationship to entertainment in a short time.

I read an article recently about how their technology strives to anticipate which films you would like based on past rentals. As a long-time video store veteran, that was one of the best parts of my job: learning a customer's tastes and trying to match it with my knowledge of movies.

To know this technology exists is, for me, more than a little disturbing — I simply cannot accept a computer program could do this as well as I could — but this is the point in time and space we've reached. 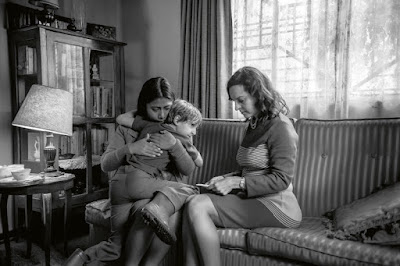 Back to Roma, though: if you know me, you know I value seeing movies in theaters, and not just because I'm traditional that way. To be immersed in a film playing on a gigantic screen, where you can take in a greater level of detail and nuance, and let the emotion and drama and action of the story envelop you, is a special feeling.

My understanding is that Netflix realized what they had with Roma and in addition to streaming it for the home video market, they chose to give it a theatrical release, and Cuarón has been encouraging people to see it that way.

When I saw Cinemart had it, my fear was it would be for a very limited time, so I went to see it the same day I read up on it. This has thrown my viewing list for this season further out of whack than it was (may have to pass on Ralph Breaks the Internet), but oh well. 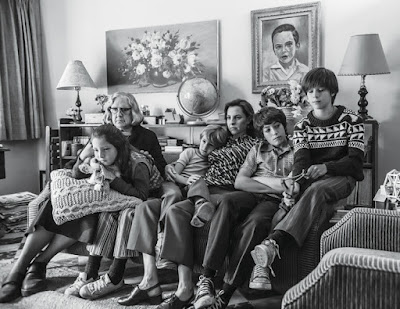 I'm just glad Cinemart chose to screen Roma, so I wouldn't have to pay fifteen bucks for it in the city. Ever since they resumed showing first-run films, their selection has been primarily mainstream.

They probably show more indies than the UA Midway on Queens Boulevard, a 20 minute walk from the Cinemart, but nowhere near as much as the Kew Gardens. I saw First Man at Cinemart, for example, as well as A United Kingdom and Nightcrawler.

Roma, however, is a foreign-language film in black and white. Perhaps it was the Netflix imprimatur that sold them on this one. Wouldn't surprise me. The late afternoon screening I went to had maybe a fourth to a third of the small room full, so there was an audience for it. 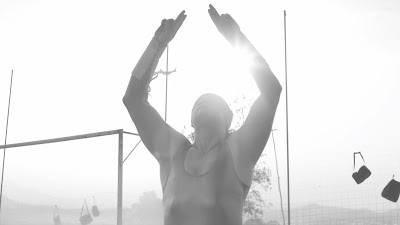 Roma is an autobiographical tale of Cuaron's childhood in Mexico City; Roma is the neighborhood in which he lived. The story centers around the nanny who raised him and his siblings, a young woman named Libo Rodriguez, named Cleo in the movie.

As a character, Cleo is practically a child herself: old enough to be a caretaker for four little kids and to have a boyfriend, yet young enough to be duped by his promises. Oh, and there's some political unrest going on at the same time.

Like all of Cuarón's films, the cinematography is breathtaking. His usual cameraman, triple Oscar winner Emmanuel Lubezki, was unavailable, so Cuarón shot it himself. He provides long, loving tracking shots of the recreated house he used to live in, as well as the city streets and the countryside.

There's always something going on in the foreground or the background. Cuarón is very conscious of space, motion and light; he wants you to linger on his compositions.

Newcomer Yalitza Aparicio plays Cleo, and hers is a simple, understated performance that feels natural. She doesn't have to carry the film, so she doesn't do much heavy lifting, yet she makes you care about Cleo. And she's pretty.

Given the setting, the emphasis on female characters like Cleo and Cuarón's mother, and the black and white approach, I was reminded of the comics of the Hernandez brothers, cartoonists of Mexican descent whose work commonly feature Latinas of all shapes, sizes, sexual orientations and ages. They had a long-running series called Love & Rockets, whose characters would not be too out of place in this film.

Cuarón took a gamble with this neorealist piece, but I think it has paid off big time. In this digital age of CGI fantasia, it's good to know that personal movies like this not only still have a place, but can reach wide audiences.


Again, Netflix would appear to have made the difference in terms of distribution. I have a feeling if Roma goes all the way and wins Best Picture (it's a cinch it will get nominated), the industry will feel the implications.
Posted by Rich at 12:00 PM