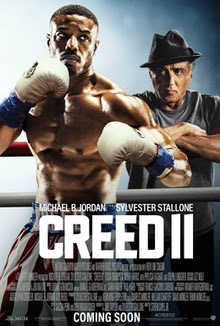 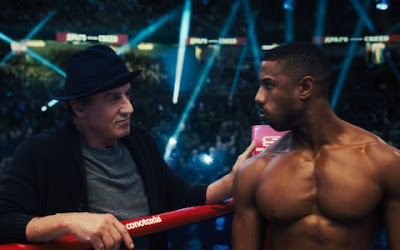 I had my doubts about this one: Adonis avenging his father Apollo's death at the hands of Ivan Drago by fighting Drago's son (sounds like a superhero movie, doesn't it?), and indeed, the film follows many of the same dance steps as Rocky IV, only shorn of the Cold War politics, but I was entertained.

There's a lot of talk about Donnie leaving his own legacy by doing this, stepping out of his father's shadow, becoming a champion for the ages, etc. Even as I watched, it felt like a stretch to me, an argument made to justify this movie — but I was willing to buy it to see Donnie's story continue, as well as Rocky's. 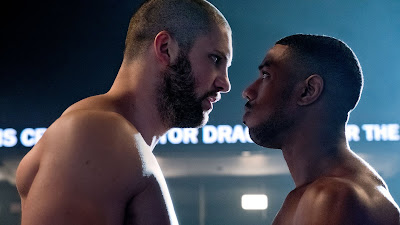 There's Donnie's relationship to his surrogate father Rocky. There are the Dragos, father and son — yes, Dolph Lundgren comes back to reprise his role in Rocky IV, as does Brigitte Nielsen as his now ex-wife. And there's Rocky's own fractured relationship with his son. 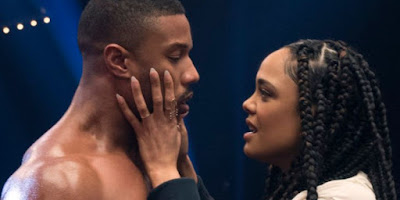 Sly co-wrote the screenplay, and the thematic elements manage to hold up without coming across as maudlin. I wonder how aware Sly was of this, but presenting Donnie, a black man, as a responsible husband and father, resonates more (to me) than the flimsy excuses used to justify Creed vs. Drago: The Next Generation. I think that alone makes Creed II worthy.

I talked about this for the first movie, but it amazes me that Sly continues to get life out of his character after all these decades. Earlier this fall we saw Jamie Lee Curtis revive her iconic 70s character, Laurie Strode, in a new Halloween movie, but that was set in an alternate continuity, one where all the sequels never happened. 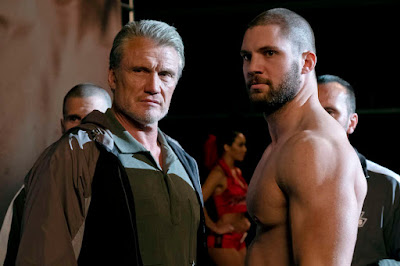 Rocky's story has needed no reboots; it has been a straight, unbroken line for over forty years, and he's all the stronger for it. If this is the last Rocky movie, he went out on a high note.

MBJ seriously looks like he could get into a ring and fight for real. So many film and TV roles these days require actors and actresses to be in phenomenal shape it's frightening, in a way. One can only imagine how much pressure there is on them to retain their figures. 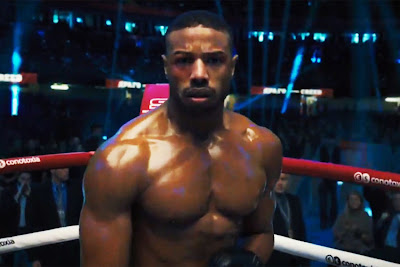 Maybe my own recent experience with training for a 5k run has made me more sensitive to this, not to mention my time with Virginia, who's a health nut, but it is something modern audiences expect now, and not just for superhero movies. I hope there isn't a downside to this. I hope Hollywood learns the lessons of the sporting world when it comes to the demands they place on its stars.

While waiting to buy my ticket, I stood behind a small group of older people, white people, who talked about Creed II with great enthusiasm. They were big  Rocky fans, but they were just as eager to see MBJ as Donnie.

Nothing more I wanna say about this, except it was cool to see.