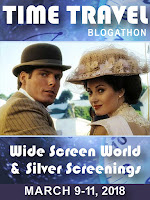 The Time Travel Blogathon is an event devoted to films with time travel as a plot point. Ruth and I thank you all for participating. The complete listing of bloggers can be found here and at Silver Screenings!

It will not surprise you to know a Godzilla store exists in Tokyo. It opened last fall, in the Shinjuku district, and though I don't read Japanese, I can tell from looking at the pictures there's no shortage to the depth and breadth of merchandise available. Take a look inside with this video (it's in English).

With the forthcoming release of the new Pacific Rim movie, now seems like a good time to talk about what the Japanese call kaiju, or as we called them when I was a kid, giant monsters. They wreak havoc on our cities in the movies, leaving mayhem and destruction in their wake, and we love them for it. What's the big deal, anyway? 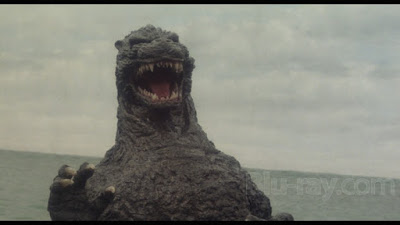 The short answer is it's a geek thing — but giant monsters have terrorized theaters at least as long ago as The Lost World from 1925, back when the word "geek" had a different meaning. Movies, indeed fiction in general, are born of our nightmares as well as our dreams, and what are giant monsters but examples of nature run amok?

Hurricanes, tornadoes, earthquakes: the damage they do is not unlike that caused by Mothra or Gamera or Biolante on a good day, and we're as helpless to stop them, but we've learned to compensate. Hell, we give names to natural phenomena like hurricanes, and naming, as I'm sure you're aware, gives us a certain level of power or control over a thing. 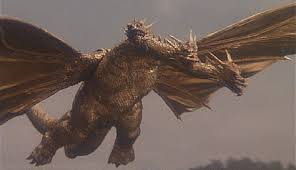 So if we can control nature, and our fear of it, in this way, why not take it a step or two further by imagining nature in a different form, something physical, something well-suited for the new medium of film? Thus the Lost World dinosaurs, King Kong, Mighty Joe Young, the beast from 20,000 fathoms, etc.

Japan raised the stakes with Godzilla and his peeps, born of the post-war atomic age and made into a subgenre all their own, with its own unique conventions. America noticed, and soon giant monsters took their place alongside Frankenstein, the Wolf Man, the creature from the id, Gort, and other homegrown monsters of cinema, all as a result of personifying the destructive forces of nature.

These days, kaiju can be visualized in better ways than a dude in a cheap rubber suit, so perhaps it's no wonder movies like the Pacific Rim flicks are so popular, and no doubt will continue to be so. 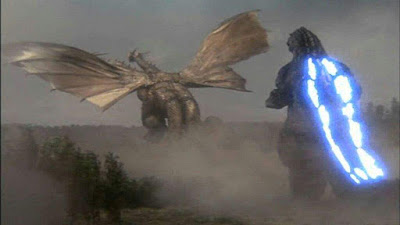 Back to Godzilla, though. In his sixty-plus year reign, he's taken on plenty of opponents. Perhaps it was inevitable somebody would make a movie in which time travel brought one of them to life, hence the 1991 flick Godzilla vs. King Ghidorah. Voyagers from the 23rd century come to the 20th with a plan to prevent Godzilla from being born, but in the process, they end up spawning a new monster, a three-headed dragon called King Ghidorah, and the only way to stop it is to make Godzilla live again!

Ghidorah debuted in 1964, in a film from original Godzilla (AKA Gojira) director Ishiro Honda. Ghidorah the Three-Headed Monster was a battle royal also involving Mothra and Rodan as well as the big G. Ghidorah was an alien in that one; here, his origin is different. Three genetically-engineered dragon-like pets, also from the 23rd century along with the voyagers, are exposed to the same atomic radiation that created Godzilla in the past, World War 2 to be precise, and you can guess the rest.

The movie is as silly and nonsensical as the other kaiju films, though one scene stood out for me. In the past, we see a dinosaur scare off a force of American soldiers engaging the Japanese army on an island (don't ask me what it was doing there), sustaining mortal wounds in the process. This dinosaur would eventually become Godzilla after its subsequent mutation. 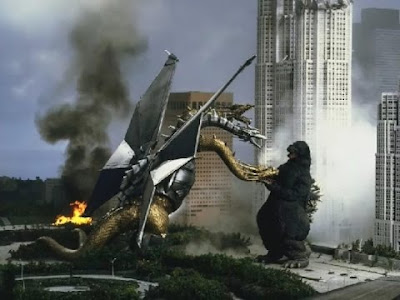 Now it wasn't like it scared off the Americans deliberately, but the Japanese, led by their commanding officer, acknowledge the creature's sacrifice and give it a reverent salute (as if they see dinosaurs all the time), grateful for its intervention. I liked that moment. It felt evocative of the alternative attitude the Japanese culture has towards kaiju.

That officer lives to the present day, and as Ghidorah destroys everything around him, he has an almost messianic belief that Godzilla, the mutated version of the dinosaur he encountered long ago, will save Japan again. In a film bogged down with dumb subplots, he stood out. I wish they had focused on him more.

Why is Ghidorah a king? What is he king of? Why do they pronounce it ghee-DOR-ah instead of GHEE-dor-ah? Why does he even have that name? Search me. I think this was meant to be a reboot of the character, but if you had never seen the original, the name would make no sense to you. It's one of those things you just have to accept. Eh. Whatever. I'm not likely to return to this one anytime soon.

Other time travel movies:
Sleeper
X-Men: Days of Future Past
Looper
Frequency
Back to the Future Part II and III
Posted by Rich at 7:30 AM