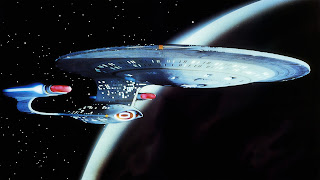 Ah, the good ol' Enterprise-D. Whenever I see it, I can't help but think the saucer section is so big it'll make the whole thing tip over. If the original 1701 is evocative of a winged horse, as it has been described, the D puts me in mind of a gigantic, spacefaring whale. The E feels flatter by comparison.

It's almost ridiculous how luxurious the bridge looked like, especially next to other iconic ships: the tight, cramped cockpit of the Millennium Falcon; the sterile workspace of the Jupiter II; the cluttered nerve center of The Matrix's Nebuchadnezzar. The bridge of the D is warm and inviting, with smooth surfaces and gentle curves that make space exploration look fun. 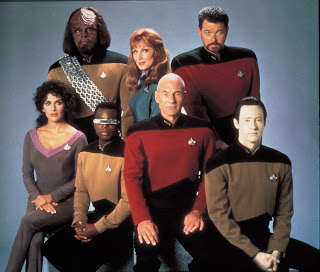 It has been said that the crew of the D is, to put it bluntly, too damn nice: that Gene Roddenberry took his ideal of improved humanity too far when he created the TNG cast, and as a result, they're not as three-dimensional as they should be. If you go by merely the show and the four movies, excluding the novels, comics and other non-canon works, I can almost see that. I freely admit it's hard to find conspicuous flaws in characters like Geordi or Deanna or Dr. Crusher. (Maybe that's why Worf has always been my favorite.)

There's something to be said, however, in favor of unequivocal Good Guys. On TV these days, the pendulum has swung in favor of antiheroes, protagonists who do (at best) morally questionable things. I don't even watch TV and I'm aware of this. I have no doubt they can be compelling to watch.

Sometimes, though, you just need to be certain who's wearing the white hats. It can be a comfort in trying times. I want someone like Riker in my corner when the chips are down, because I know he won't be afraid to stare the bad guys down and do what it takes to beat them, but more than that, I know he, and the rest of the crew of the D, understands what's right. I don't think that's a bad thing.