Requiem for the video store, part 3: It's dead, Kim! 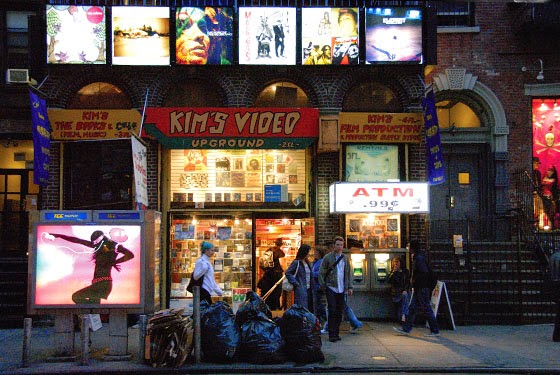 ...There was a mythos that everybody was an asshole there — like you would get serious attitude from the clerks. I’m a very jovial and gregarious person, and I didn’t play it like that. I talked about all the movies and all the staff really got along. When I was there, there was never any attitude that wasn’t fun. But I’d make mix tapes and always wind up playing them too loud. The customers would complain — they’re trying to pick a movie and the music’s blasting. All my connections today come from that job — everybody I work with now. The connections have like six degrees of separation, but it all goes back to Kim’s.

I worked at the Avenue A Kim's Video for the final year of its existence, from 2003-04. I'm pretty sure I answered a classified ad in the Village Voice to get the job. Previously, I had put in five and a half years at a video store on Third Avenue in Manhattan, so I had earned my cinematic education by the time I arrived at Avenue A. Unlike my first day at Third, I felt like I fit in at Kim's instead of being low man on the totem pole.

It helped that my buddy Steve was already there, and recommended me. We worked together on Third for a long time. We both became managers there, which meant dealing with corporate accounts as well as regular ones, so our experience went beyond simply renting and returning videos - not that it would make that big of a difference in the end.

The East Village was little different then than now. Gentrification had already spread throughout the deeper parts of Alphabet City and the Lower East Side, and the homeless had been kicked out of Tompkins Square Park long ago. Bike lanes and bike share hadn't arrived yet, though, and Friendster and MySpace were still the social media of choice. Indeed, I specifically remember reading about Friendster in the Voice and seeing practically every one of my co-workers opening an account before I finally succumbed as well.

Kim's Video was among the best jobs I ever had, I think. If the store hadn't closed, I would've easily stayed there longer. Why? Because even though we at the Avenue A store were part of the mighty Kim's chain, in terms of day-to-day activity we were fairly independent, autonomous, almost self-sufficient. Some would say we were neglected, and that was true too. For instance, it took longer for special orders of ours to be placed by the Mondo Kim's flagship, much less filled, which was a source of great frustration for us because we were always on the lookout for rare and obscure movies. Still, I was thrilled to be working in a neighborhood I had loved ever since I was a skinny(er) 17-year-old art student taking Saturday classes at Cooper Union and imagining I was living it up at night, even though it was only six PM and Daylight Savings Time had just ended. 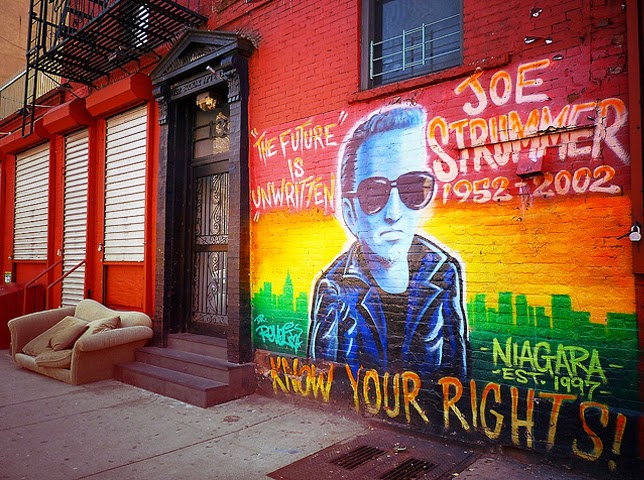 The entrance to the store was set back, inward from the sidewalk, to accommodate a flight of stairs leading to a bar underneath us. I remember meeting the bartender during my first few weeks at Avenue A. To the right of us, heading north, was a Mexican joint and a tiny little juice stand that, remarkably, is still there today. We were friendly with the girls who worked there. (They had the best marshmallow squares.) To the left, heading south, was a karaoke bar and a Chinese food place. The store itself was a smallish space with an alcove in the back for porn and the elevated counter, with TV, to the right as you enter. The bathroom was immersed with graffiti and stickers for bands and websites and stuff. Every time I used it I felt like I was in a club.

At Avenue A - and I imagine this was true of the other Kim's stores as well - we tended to have a much more irreverent attitude with our videos than at Third Avenue, a store which aspired to be a more upscale, family-friendly place. For example, the plastic cases that contained the VHS tapes were supposed to be labeled on three sides in black Sharpie marker, but we didn't always feel compelled to write the exact movie titles on them. Sometimes we'd write mocking parody titles, especially on new releases, double especially on lowest-common-denominator action movies and romantic comedies. The customers always got a kick out of it. The boxes got similar treatment. I remember giggling like a schoolgirl when I took the box for Phantoms and applied a blank sticker above the title, on which I wrote, "Affleck was DA BOMB in..." This sort of thing would've never flown at Third Avenue for a second.

The manager who hired me left after a few months; the one who replaced him was this laid-back dude named Joie (pronounced "Joey"). He was a musician, like several of the people there (some of whom occasionally performed at the Sidewalk Cafe across the street). I got along with him great. At one point late in that final year, he went on a month-long vacation to tour with his band, I believe, and he left me in charge. Steve, if I recall correctly, didn't want the job and I wasn't exactly against the idea. 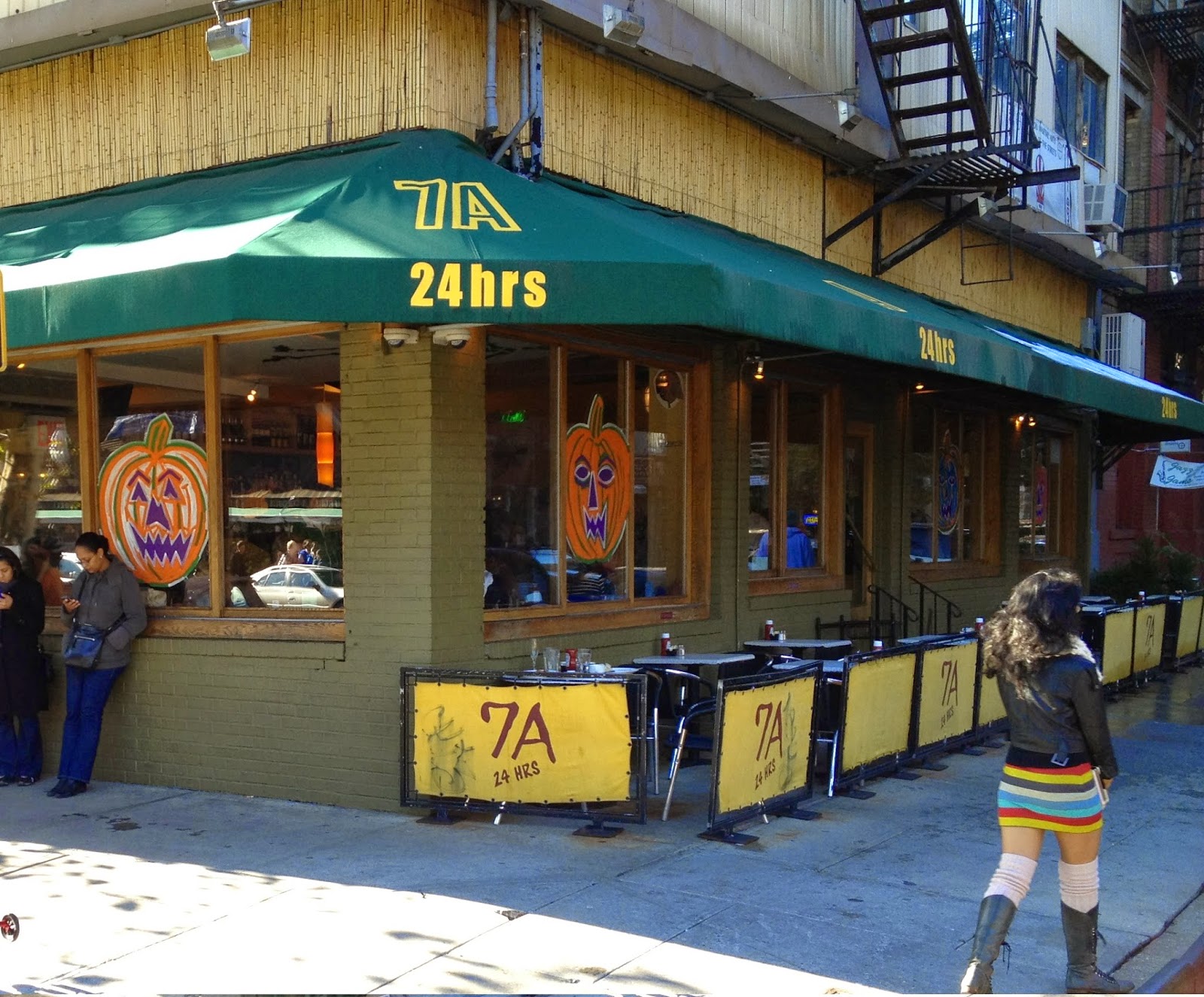 Most of the rest of the staff were kids, twentysomethings. Among them was future Voice and Film Comment writer Nick Pinkerton, whom I've talked about before. He knew his stuff even then. In the article quoted at the top, I'm fairly certain I recognize the name Emilie Friedlander, among those quoted, as being another former co-worker. She was a tall, skinny girl, very young. I got along with her well. The only other senior citizen there besides me and Steve (and maybe Joie, not sure) was Dave, a jazz musician who played the saxophone. Still does. He and I stayed in touch after Avenue A closed; in fact, I saw him perform in Manhattan last weekend.

My memories of daily life at Avenue A jibes with some of the things said in the article at the top about Kim's in general. I wouldn't say we were as snobbish as the other stores may or may not have been. Yeah, there were customers we hated, and we were probably rude to them, but in terms of movie smarts, I don't recall an overall snobbish atmosphere. The girls were super-friendly, and the guys - well, okay, some of the guys may have had more of that attitude than others, I won't deny that. Still, I honestly believe snobbishness was not as pervasive when I was there as the Kim's legend would have you believe. Speaking for myself, I know I was much more loose and relaxed around the customers than I was at Third Avenue, but that was because I had fewer responsibilities. Plus, I was less uptight about things like porn. 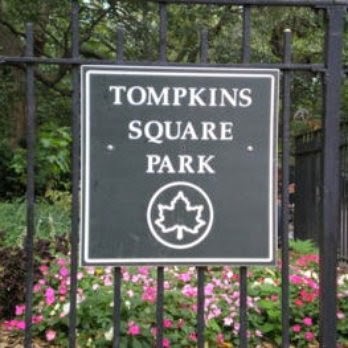 We had celebrity customers, like the other Kim's stores. My most embarrassing moment at Avenue A, in fact, came one evening when who should walk into the store but Academy Award nominee Chloe Sevigny, with two of her friends. Now, you have to understand that I've been known to get the yips in the presence of a celebrity - not so much when I see one on a location shoot somewhere in the city, but more like if they're walking down the street or something; an unexpected encounter outside of a film context. "Oh, look, there's Morgan Freeman coming down Madison" and suddenly I turn into Ralph Kramden.

So, a relatively known actress whom I've seen before in movies I like makes a surprise appearance where I work. Naturally, Joe Cool here has to try and impress her, so I say something like, "Wow! I loved you in... um... you know..." I swear to god I had Boys Don't Cry on the tip of my tongue but I couldn't bring up the title... and all the while she's giving me this deadpan look like she's either embarrassed or disgusted or both. Finally, one of her friends provides the title and I go "Yes! Of course!" and try to laugh it off, feeling two inches tall the whole time. Don't recall if they walked out with a video. Probably not.

I was at Avenue A the summer of the last major blackout the city had. It came in the late afternoon, towards the end of my shift, as I recall. I was supposed to open the store the next day, but of course, no one knew how long we'd all be without power, and since I was still new there, I was told to come in the next day just in case. I did, after spending the night at Vija's since I couldn't go home to Queens, and after standing around waiting for a half hour or so for the manager (the one who hired me, not Joie), I said the hell with this and left. I walked uptown and over the Queensborough Bridge and as far as Sunnyside in hot weather before stopping for lunch, and eventually catching a bus that wasn't packed to the gills. 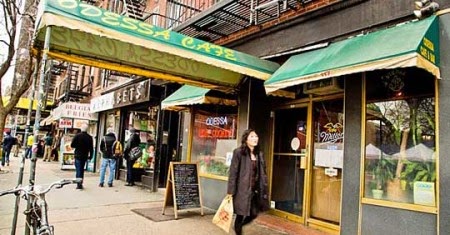 The one time I remember meeting Mr. Kim himself was on the day the store closed. I was mad because we had been given little warning. I had hoped to be transferred to one of the other locations, and I tried to convince him that I should be, given my experience. He struck me as cold and humorless. Granted, I wasn't exactly catching him on a good day, but he seemed unsympathetic to my situation. I walked out in a huff and that was the last time I ever saw him.

Avenue A wasn't all fun and games: it was a long walk to the nearest subway from where we were and I had to constantly shoo away bums who camped out in front of our doorstep at night to sleep. But there were plenty of good times too. Kim's Video may be dead, but for me, it died years ago with the Avenue A store... which I can't even find a halfway decent picture of! (Hence all the shots of the surrounding neighborhood.) Maybe we were the red-headed stepchild of the Kim's chain, but it never bothered me much. I, for one, had a good time there.