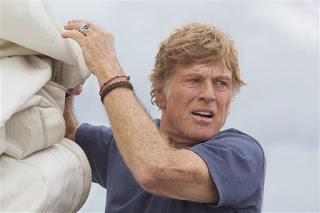 This was a pretty good movie. I didn't really expect it to be like LIFE OF PI. No tiger, for one thing. For another, it's much more stark and bleak. I mean, the title alone should give you a clue. I wanna talk about the ending. Robert Redford's finally lost his raft and he slowly sinks to the bottom of the ocean and that's when the lifeboat reaches what was his position, and Redford swims to the surface and takes the sailor's hand and boom, the movie ends. Was that real or just Redford's imagination? I saw this with one other person, and when it was over, she said to me that she thought it was just in his head. I admit, the thought wouldn't have occurred to me if she hadn't brought it up - I mean, I suppose it's just barely possible that him getting saved was real, but the more I think about it, the more it does stretch credibility. I mean, he gets saved right at the point when he's about to die? Sounds like a Hollywood ending, but this didn't seem like that kinda movie. So maybe it is like LIFE OF PI after all: which ending do you believe?
Posted by Rich at 1:00 PM