Five more classic films that could run on holidays 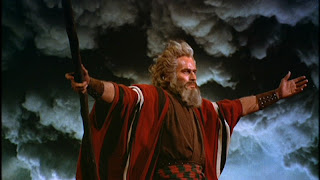 So did you watch The Ten Commandments this year? I didn't sit through the whole thing, but I had to see the parting-of-the-Red-Sea scene at least. It's remarkable that this old chestnut continues to get plenty of mileage, and the pairing of this movie with the Easter/Passover holiday season is obviously integral to its longevity. Regular people will say things like, oh, I don't like those old films; they're too corny, they're in black-and-white, they're not as good, blah blah blah - and yet they'll gather round the TV for one during a particular holiday, whether it's this or It's a Wonderful Life during Christmas. This makes me wonder: what other classic films could be tied to a holiday?

They need to be films that everyone knows, or at the very least, have stars that everyone knows. They don't have to have a direct correlation to a holiday (Life isn't really a Christmas movie, for example), but it certainly helps. They need to be able to play on free TV - ABC shows Commandments every year - so that it can have the widest audience. They should probably be feel-good movies as well, or at the very least, they should end on an up note. And they absolutely should remain in black-and-white (unless, y'know, they were originally shot in color). Here's what I came up with:

- Yankee Doodle Dandy for Independence Day. Duh. This one's a no-brainer. I watched it again recently and enjoyed it every bit as much as I did the first time I saw it. When I was in video retail, I would play it if I was working on July 4th. It's hard to see how anyone could resist a movie like this: yeah, the patriotism stuff is over-the-top, but if that sort of thing can't play on America's birthday, when can it play? Besides, it's so awesome to see Jimmy Cagney dance. 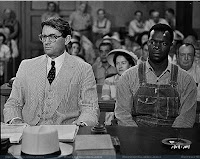 - To Kill a Mockingbird for Martin Luther King Jr. Day. To be honest, I don't feel comfortable about this choice. Given the parameters of this experiment that I set for myself, it fits perfectly, but I would much rather see a movie like Do The Right Thing playing on MLK Day instead - a movie written and directed by a black man. Still, it would never play on free television given its language, even though that language is necessary to the story. So I figure it's either Mockingbird or something horribly outdated and schmaltzy, like - ugh! - Guess Who's Coming To Dinner.

- The Great Escape for Memorial Day. Um, don't hit me, but I've never actually seen The Great Escape... but I do know how highly regarded it is as a war movie! It's got manly men doing stuff! It's got Steve McQueen on a motorcycle! And most importantly, it's got American soldiers (and others) resisting the Nazis and being heroes, and let's face it, what better time would a movie like this play than on a holiday devoted to those who served this country in times of war? Plus, it's in color. 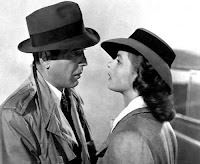 - Casablanca for Valentine's Day. This is another questionable choice, I think. To me, this is a war movie with romance added, but I suspect many, many more people see it as a romance movie with some war stuff added. Who's right? I say we both are. Still, when you think of the great movie love stories throughout history, few can top this, so I guess my view of it doesn't count for a hill of beans in this crazy old world. Besides, if any movie should be available to watch every year on free TV, it's this one. 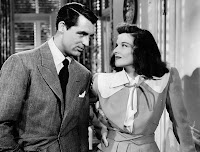 - Holiday for New Year's Eve. Perhaps not as well known as these other movies, but it's got two of the all-time biggest, most beloved movie stars ever in a light romantic comedy with a New Year's Eve scene in it. I think if it were played often enough on New Year's Eve, it could catch on. Besides, it's called "Holiday"; I kinda think it deserves to be associated with an actual holiday, don't you?