The Museum of the Moving Image, reborn 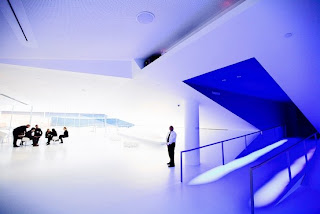 ...The threefold nature of MMI's mission—film screenings programmed by David Schwartz, education initiatives overseen by Christopher Wisniewski, and ongoing and permanent installation exhibitions and acquisitions—are all poised to benefit substantially from the museum's makeover. Mr. Wisniewski offered that the physical needs of the museum's education programs were "one of the impulses for this expansion project in the first place. Education has been a central part of the museum's mission since it first opened. We've been booked to capacity with school kids for years, and normally we have to turn people away."

Did somebody say film screenings? I definitely plan on making it over there for a few, so expect my take on the renovated Museum soon.

Also:
- Director Paul Greengrass has a Martin Luther King biopic planned. (Vulture)
- Paul Haggis says he's actually not involved in a Scientology tell-all book. (24 Frames)
- The Chilean miners are ready to tell their story for Hollywood. (THR)
- The Oscar-winning Irish musical Once is coming to Broadway. (TheaterMania)
- Sorting out the problems in Oscar's foreign language category. (The Wrap)
- Two perspectives on what went wrong with For Colored Girls. (In Contention, GMan Reviews)
- What exactly is Jeff Bridges saying in True Grit? (In Contention)
- This new blog shows pics of classic film stars on bicycles. (Rides a Bike)
Posted by Rich at 9:01 AM