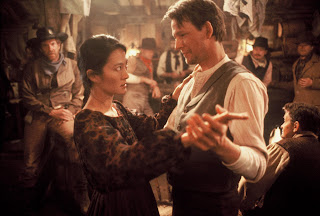 - Thousand Pieces of Gold. Before Memoirs of a Geisha, there was this film from 1990, also based on a book, based on a true story: in 19th century China, a young woman is sold into an arranged marriage in gold-rush era California and fights to maintain her dignity in a land where her fate is not in her hands.

Fellow Trekkies are quite familiar with actress Rosalind Chao, a supporting actress on both TNG and DS9 as Chief O'Brien's nagging but lovable wife Keiko. Chao, of course, has done lots of television and film work over the years. She's gonna be in next year's live-action version of Mulan.

Gold wasn't a big hit but it was well-received by those who initially saw it. Now, thanks to the film preservation group IndieCollect, it has received a 4K restoration, done with the cooperation of director Nancy Kelly and producer Kenji Yamamoto, both of whom were on hand to receive this year's QWFF Spirit of Queens award. (Chao, sadly, didn't make it to QWFF.)

Chao is quite good. It was nice seeing her speak in Chinese. Her character is determined to not be treated as a whore by the men around her, and that propels her through the story, despite her changing circumstances.

Chris Cooper, long before he became Chris Cooper, plays the guy who steals her from her intended husband out of what he claims is kindness, but he's got flaws of his own he needs to overcome.

This was the first and only feature for Kelly, a self-taught director adapting a screenplay by Anne Makepeace. According to Kelly in the Q-and-A afterwards, institutional sexism stalled her career before it could go any further.

Yamamoto, who was unpaid for Gold, learned what he needed to learn during the $1.8 million production. He characterized his partnership with Kelly to "two dolphins swimming side by side." 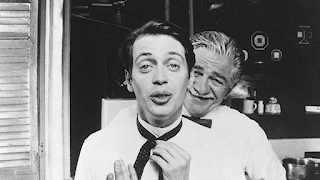 - In the Soup. New York screenwriter struggles to make a movie, backed by an eccentric financier full of enthusiasm for filmmaking but deals in shady business on the side.

The other Spirit of Queens winner was former MOMI curator David Schwartz, who introduced this 1992 indie darling, starring Seymour Cassel and Steve Buscemi.

This reminded me very much of the indie films I remember discovering in video retail during the 90s. It felt very much in the same spirit of the early work of Smith, Lee, Spheeris, Seidelman and Jarmusch (who makes a cameo): the rough cinematography, the character-driven storyline, the attitude.

Director-co-writer Alexandre Rockwell was on hand to discuss his film. He said it was inspired by people he knew. He talked a lot about working with the long-time veteran Cassel, whom he lovingly called "an absolute madman," an actor who challenged him as a filmmaker.

Rockwell filmed mostly in the East Village, before it gentrified; he talked about the "beauty in grunge." Also, he said he liked non-actors, like children, because of their behavior. All of this explains his ethos that "the only important thing in cinema is the truth."

- Beyond the Veil. Being a Muslim woman in the modern world. Lebanese-American filmmaker Sandy Ismail crafts a sensitive portrait of an often misunderstood culture from a female perspective that feels empowering as well as entertaining.

- Best Wishes. Marital advice from a father to a son. Kevin Etherson's piece is funny, with a lovable performance from Patrick Garner as the father.

And that's it. Next year is the tenth anniversary, and I think it'll be exceptional.
Posted by Rich at 7:10 PM