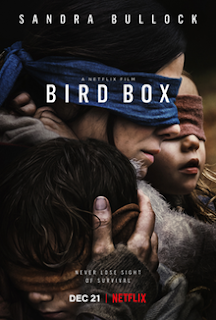 
I had resolved I would never see it and forgot about it, but now I have Netflix, and last week I was reminded of this film. I decided to watch it blind, so to speak — that is, without knowing a single thing about it. Yeah, I said I wouldn’t do that again, but every once in awhile it’s good to watch a movie devoid of hype.

Something is making people go nuts and commit suicide. Airborne virus? Mass mind control? The answer is very vague; all we know is it’s something in the sky that, when people look at it for too long, effs with their heads. Bullock is trapped in a boarded-up house with a bunch of strangers and they all try to survive, Night of the Living Dead style... but this situation ain’t going away overnight..
. 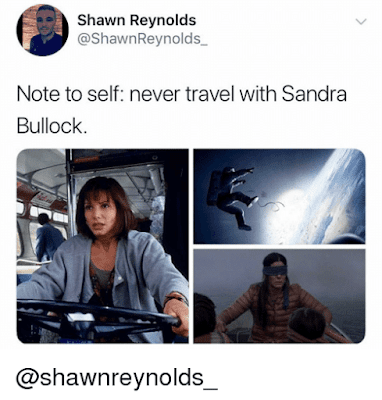 I didn’t think it was as bad as some critics thought, mostly because of Bullock. Watching her grow from girl next door-type rom-com star to Dramatic Actress has been remarkable (though I hope she doesn’t abandon comedy completely). She’s fierce in this one, doing things blindfolded like row a boat amidst strong currents and stumble through a forest that had to be terrifying.

It was stuff like this that inspired the “Bird Box challenge”: basically, ordinary people trying to do everyday things blindfolded. Why did this get started? Why does any stupid trend get started on social media? And why this movie in particular? Other than Bullock’s performance, this doesn’t strike me as being all that different than most horror movies: boogeyman arrives, stupid people fight the boogeyman and each other; lone smart person survives. The protecting-the-kids angle is good, and I’ve seen articles that play up the mama bear aspect, but that doesn’t explain why idiots are running around doing things blindfolded. 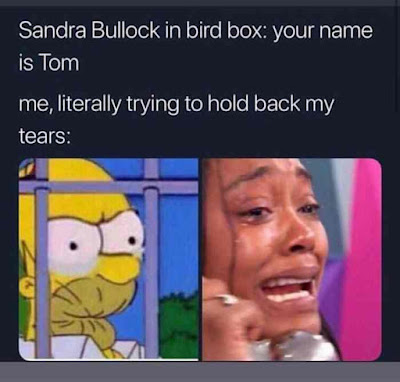 No, I think this is just a right time/right place thing. Would this be as big a hit if it had been released theatrically? Not in December it wouldn’t have, amidst Aquaman and Mary Poppins Returns and that animated Spider-Man movie and Green Book and Fantastic Beasts and Wreck it Ralph 2 and... you get the idea. It would’ve been buried. It probably would have found an audience in January, but would it have been the phenomena it is now? Debatable.

On Netflix, it reached people when they were at home with their families, celebrating the holidays, who probably didn’t wanna go out in the snow and the cold weather. They logged on to Netflix, saw this new Sandra Bullock movie, said hey, what the hell, gave it a try and BOOM. Though not even that explains the “Bird Box challenge.” I’m not sure anything can. 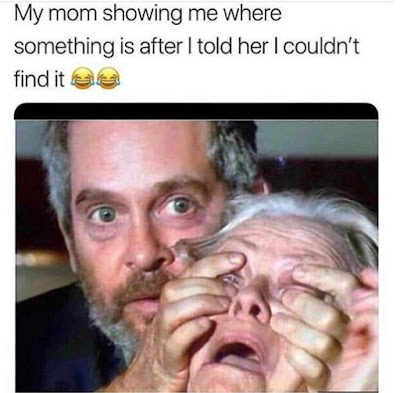 But wait! There’s more! Apparently the Internet discovered Bullock with this movie. Now, in all fairness, this is something that happens to the biggest stars sooner or later: a new generation sees a hot movie starring someone from the preceding generation without knowing anything that star did before. The silent film generation probably turned their noses up at the young Turks of the 50s who called Gloria Swanson “the Sunset Boulevard lady.” I’ve certainly been guilty of this when it comes to Old Hollywood stars.

By the same token, though, Gravity wasn’t that long ago, and that was a major release Bullock did while she was more or less the same, looks-wise. She’s still in her prime, she still gets written about in the trades and in the gossip rags and Hollywood websites. I don’t give Millennials credit for much, but are you seriously telling me they forgot about Bullock in the span of a handful of years? I call shenanigans. 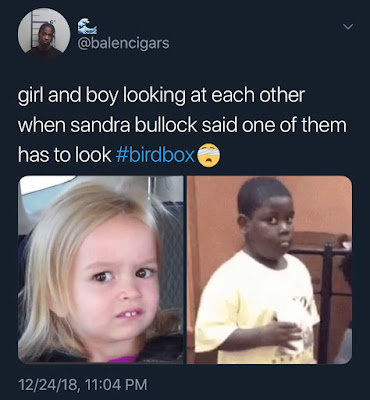 Bottom line, if this sort of thing had to happen, I’m glad it happened to Bullock in a movie of hers. She’s one of the few Hollywood megastars who strikes me as not only genuine, but genuinely likable, someone with whom I would want to share a beer and have a long conversation. Maybe I’m wrong about her — recent events have reminded us, once again, that celebrities’ public facades hide all manner of depravity — but I would like to think I’m not.
Posted by Rich at 3:45 PM