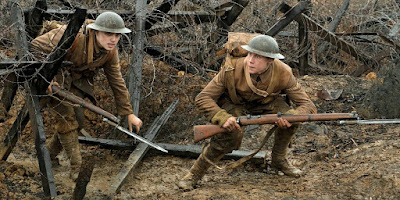 Shooting a film in one shot, or at least making it appear like one shot, might be the greatest challenge a director can undertake, yet when I wrote about the last movie I saw to attempt this feat, Best Picture winner Birdman, I didn’t write about that aspect much because the movie as a whole befuddled me more than I expected it would, but that had more to do with the screenplay than the camerawork... which was not an issue with 1917, a World War 1 film by American Beauty and Skyfall director Sam Mendes that puts the viewer in the trenches and battlefields of France with the protagonists, a pair of soldiers who must warn a battalion cross country of an impending attack, and it doesn’t take long before you stop thinking about how cinematographer Roger Deakins kept the visual flow so consistent and how editor Lee Smith made every cut so seamless and invisible and you get caught up in the story because the cumulative result bonds you with Blake and Scofield; you feel their pain when they get hurt and your heart races when they crawl across a battlefield anticipating enemy fire and you fear their mission may not succeed in time because we stick with them through everything, every step they take, every friend and foe they encounter, every obstacle that slows them down; a lifetime spent watching movies and TV has conditioned us to anticipate cuts in the action but we don’t get that here, and one has to adjust one’s thinking to compensate, but it’s worth the effort because I’m convinced this is one of the best war movies ever made—and Mendes discusses most of the nuts and bolts behind it here.