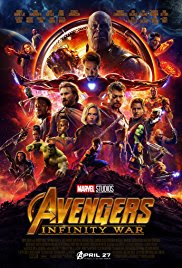 It never occurred to me I could see Avengers: Infinity War with anyone else. Not that I was so psyched to see it, like I would have been twenty years ago, but even now, after the new wave of superhero movies have broken the bank time and again, I still thought of this, however unconsciously, as a niche pleasure, not something "ordinary" people would dig.

So when I told Virginia I was gonna see it — alone, by implication — there was this awkward pause for a second. We had seen Black Panther together, but even that almost didn't happen: when we tried to pick out a movie, I had said to her something like well, you're probably not interested in an action movie... are you?

Turned out she was willing. She didn't grow up a superhero geek, you see. She had no sentimental ties to BP or any other long underwear types, so why would I think this might interest her — or so my logic went. 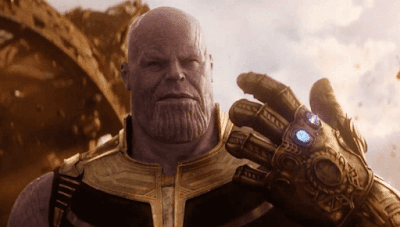 In the end, she really wasn't that interested in IW because she thought there would be too much she wouldn't understand. Still, I felt a little guilty for making the assumption. It was okay, though. We went to a play instead and were happy.

I talked to John about it not long after; like me, he grew up with comics. He managed to get Sue interested in the long underwear world, but he also talked about how he used to have a similar attitude towards prog rock: the whole "us and them" mentality. 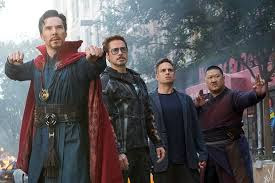 It's something I'm feeling more often, now that superhero comics — or more to the point, movies and TV shows and merchandise based on superhero characters — have become mainstream. (Whether anyone gives a fiddler's fart about the comics themselves is another matter.)

You don't have the right to wear that Fantastic Four T-shirt. I read Fantastic Four long before you even knew who they were; I've probably forgotten more about them than you'll ever know, so where do you get off posing?

I don't know how to move past this  mentality. I'll have to eventually, though; the walls of Fandom Assembled have been breached and there's no going back to the way it was twenty years ago.

Back to the movie, though. I have to admit, it was amazing seeing so many familiar characters on one screen. This was my first look at Tom Holland as Spider-Man number three; he seemed much more gee-whiz than Maguire (don't recall what Garfield's Spidey was like), almost as if he was playing him as the Beaver. As for Benedict Cumberbatch as Dr. Strange, he was perfectly cast. He gave Strange a bit of an edge, which I liked.

Overall, though, my feelings about IW are summed up quite nicely by my cartoonist friend Pam Bliss in this post. It should be noted she does not make comics about superheroes, at least not the kind that are made into movies. 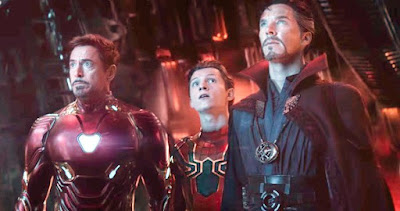 There's one point of hers in particular I wanna highlight:


...It’s too “epic”.  The stakes are so high and spread so wide that it’s impossible to care about that either. The end of the world, not very interesting on the best of days, is made so dull and tedious that you are pretty much rooting for Thanos at the end.  He may be an equally boring villain with the stupidest motivation ever, but at least he seems pleased with his results.

It's a similar pattern to one I became aware of once Marvel and DC pursued crossover events in their comics as a matter of course. There would be a book I'd genuinely like, because of a writer or artist or theme, that seemed as if it could be read independently of the rest of the shared universe.

Then a crossover event would happen and sooner or later that book would get caught up in it and I'd have to pay attention to the event on some level if I wanted to understand what was going on, which I didn't want to do because I didn't care about the other books central to the event. 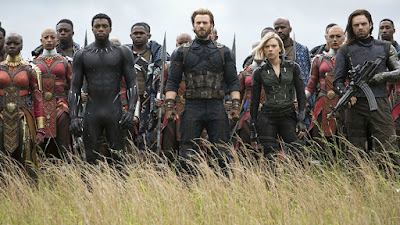 The Guardians of the Galaxy fit this bill. They were a big reason I saw IW, and they were fun, as usual, but one character died halfway through and another appeared to die at the end, and because this isn't a complete story like I thought it would be, I have to wait till another damn movie, Captain Marvel, in all likelihood (which I wasn't planning on seeing), to find out what will happen to them, and I get sucked further into the tapestry of the Marvel movies and... 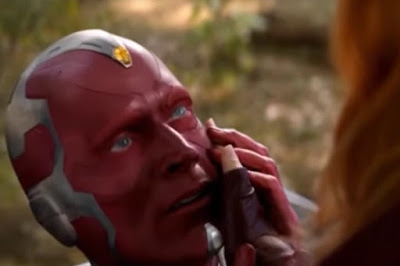 I'm not gonna make any promises this time. I couldn't have predicted, for example, that Panther would become a cultural touchstone reaching far beyond Fandom Assembled, in addition to being a genuinely good movie with something to say. (I think a Best Picture nomination is possible.) That's always a possibility.

That said, I still feel like an idiot for getting caught up in the exact same pattern again. Let the rest of the world revel in the fantasia of the Merry Marvel Movie Machine, which will keep producing films (read: printing cash) for Disney till the end of time. Audiences have clearly voted with their dollars in favor of it. Fine.