March of the Wooden Soldiers 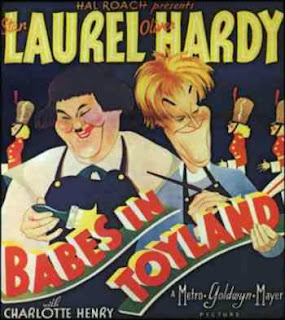 March of the Wooden Soldiers (AKA Babes in Toyland)
seen online via YouTube
12.21.11

Jacqueline from Another Old Movie Blog recently posted an interesting theory about Christmas movies. She says that modern ones tend to put Christmas at the forefront of their stories, which makes them less enduring than older ones that tend to use Christmas as the backdrop instead:

...As every classic film fan can tell you, we notice the backdrops. We study them. They are important just where they are. Bedford Falls is the backdrop; James Stewart and his stupendous meltdown and the reasons for it are the story. But through the telling, we know all about Bedford Falls, and it becomes a character in the movie. The Christmas climax is fitting because Christmas is not the nightmare; it’s just the time the nightmare occurs...

By keeping Christmas in the background, the classic Christmas movie becomes so much more meaningful than the trite “finding the true meaning of Christmas” or having “the best Christmas ever” stories we have today. The classic Christmas film is about life and death, prison and sickness, lies and deceit, and never getting what you really want. Then the Christmas scene -- like the thunderous ringing of church bells or the clash of symbols that accompany it, makes us feel triumphant in a colossal way, because we have discovered again we are human and survived being human, and have forgiven others for being human.

I suspect she's speaking in general terms; while I haven't seen very many modern ones, I can certainly think of a few that use the holiday as a background (Die Hard, Batman Returns, Lethal Weapon), but setting aside the modern-day-versus-classic aspect, I can't help but agree that these kinds of movies are definitely better to watch. I may find this time of year practically intolerable to begin with, but I can still appreciate a good holiday movie. 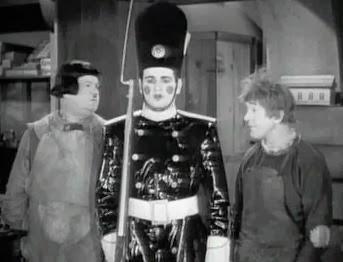 So I was stuck trying to find a Christmas movie to watch (the one I originally wanted wasn't available) when I came across this post about an old Laurel & Hardy film called March of the Wooden Soldiers. I'm a fellow New Yorker, but I'm afraid I don't recall seeing this on Channel 11 around Christmas. Then again, I would've been pretty young. (Brief aside: WPIX used to be great for showing old movies and TV shows. They'd run Honeymooners marathons and Twilight Zone marathons, and that's where my love of those old shows started. Sure, one can watch those shows online or on DVD now, but man, do I miss the excitement of seeing them on TV like that. When you can watch it anytime, it's not the same.)

Anyway, I figured at the very least it'd be an excuse to watch another L&H film and get better acquainted with them (earlier this year I watched my first L&H movie, The Flying Deuces). As it turns out, Soldiers barely qualifies as a Christmas movie; Santa Claus makes a brief appearance, but it doesn't actually take place during Christmas time.


To sum up: it's Toyland, where everyone's a nursery rhyme or fairy tale character, and the Boys are toymakers who must prevent the resident bad guy from taking over and marrying the heroine. For a kiddie movie made in 1934, it's about what you'd expect, though the obligatory musical numbers are worth sitting through in order to see Stanley in drag (not kidding). Still, who knew there'd be this much nightmare fuel in it? And I don't just mean the army of boogeymen that invade Toyland; they're gruesome, but they're supposed to be gruesome. I mean crazy stuff like this:

Those are supposed to be the Three Little Pigs on the left and the Cat and the Fiddle (as in "Hey Diddle Diddle") on the right. (Don't worry, purists; I watched Soldiers in black and white.) Folks, these stills don't really begin to capture the sheer, absolute terror of these creatures. I mean, I understand that make-up and costuming techniques weren't as sophisticated in 1934, but these costumes are seriously creepy. The faces don't move, for one thing. The cat in particular looks dead-eyed and lifeless. For another, they're this Dr. Moreau-esque hybrid of human and animal that look out of place in what's presented as a generally happy fantasy land. There's one moment where one of the pigs bites the hand of the bad guy, but of course, the mouth doesn't really move (thankfully, none of these abominations have any dialogue).

Even these devil-spawn, however, pale in comparison compared to this: 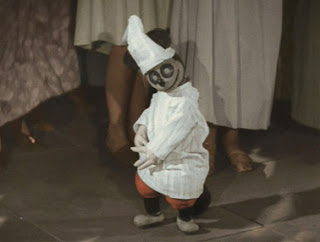 What in the name of all that's holy is that supposed to be?

It looks like somebody dressed up a monkey to look like Mickey Mouse and then set it loose - but who the hell thought that was a good idea?! Look at it! The unseeing eyes, the maniacal painted grin - that thing is waiting for the little kids watching it to go to sleep so it can creep up on them with a butcher knife!

So if this is indeed a de facto Christmas movie, then it's an extreme example: L&H are working on toys for Santa to distribute on Christmas, but that doesn't really factor heavily into the plot, such as it is, so I suppose this is the kind of movie Jacqueline was talking about. And that's cool. All things considered, it goes down a lot easier - nightmare fuel and all.
Posted by Rich at 9:03 AM