The Murder She Wrote Cookalong is an event in which the goal is to cook recipes provided by the host blog, Silver Screen Suppers. For a complete list of participating bloggers, visit the link at the host site.

I’m excited about this event because it combines two things I enjoy: cooking and blogging. For those of you joining me for the first time, welcome. A brief background: over three years ago, I had a health scare that required me to do some time in the hospital. Long story short, I needed to improve my eating habits, exercise more, and shed a few pounds. In addition to medication, I took up jogging and long walks (I ran my second 5K race in ten months last month), I cut back on snack foods and ate more vegetables, but above all I started cooking, and once I did I found I liked it more than I thought I would.

From picking out meals to shopping for ingredients to the actual process of cooking, it’s a challenge unlike others I’ve undertaken, and I consider myself a creative person by nature. Physically, I feel better now than I did three years ago, and I have a new artistic outlet. My only regret is that I didn’t do this much sooner in life. 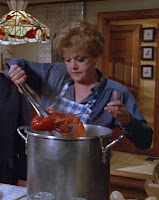 Jenny has arranged this “cookalong” to test the acquired recipes for her new cookbook, devoted to the TV show Murder She Wrote. I wrote a little bit about the show earlier this year. I wasn’t a regular viewer, but when I watched it, I enjoyed it, so I can get behind the idea of pairing recipes with star Angela Lansbury and her supporting cast and guest stars—and as an aspiring author, I admire the fact that Jenny is self-publishing her cookbook.

The recipe I’ve chosen is chicken paprika, in tribute to MSW guest star Glynis Johns. She appeared in the Season 2 episode “Sing a Song of Murder,” written by series co-creator Peter S. Fischer. Angie does a double role as Jessica and her British cousin, who fakes her own death in order to flush out whoever it is who’s really after her. She gets to sing. Patrick Macnee of The Avengers (the other ones) and Olivia Hussey also star. Regrettably, I wasn’t able to view this episode.

Johns was not a familiar name to me at first until I read about her. She was the suffragette mother in Mary Poppins.

Her film and TV career dates back to the late 30s. She was in 49th Parallel, The Court Jester (with Angie, when they were both young hotties), Around the World in 80 Days, The Sundowners (Johns’ only Oscar-nominated role), and Twelve O’Clock High, among other films, plus she had her own TV show at one point, Glynis—which, like MSW, was a cozy mystery in which she played a mystery writer! She’s a Tony winner for A Little Night Music, where she sang “Send in the Clowns.” She’s on the cover of a Led Zeppelin album. As of this writing she is still alive, at age 96.

Why chicken paprika? According to the cookbook in which this recipe initially appeared, it was a favorite dish of hers, but once she erred big time in making it:


...I have served this dish on a number of occasions but the most memorable was when I prepared it for a dinner party I gave for Sir Alexander Korda, at the time when he was my boss.

On my arrival home after filming all day, I was a little short of time, and immediately went to the kitchen to prepare the Chicken Paprika.

I put it straight into the oven, and then arranged the rest of the menu.

Dinner time came, I served all my guests, and then sat down at the table.

I was horrified to see them all turn red in the face; then they started to cough and choke, and some had tears pouring down their faces.

To my horror I found that I had used red cayenne pepper instead of paprika, and had liberally sprinkled it over the casserole.

My immediate reaction was to get my guests to sit with their tongues in their wine glasses until they felt a little better.

I then retired sheepishly to the kitchen to produce a hasty snack.

You can judge for yourself how much truth there is to this story, but we do know, according to IMDB, she had an uncredited part in The Thief of Baghdad, from 1940, produced by Korda, and a bigger role five years later in Vacation from Marriage, directed by Korda.

So let’s give this a shot—and hope it comes out edible. The list of ingredients and the directions are taken directly from Johns’ recipe: 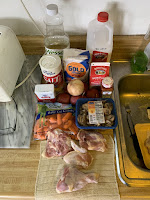 - Skin and wash the chicken joints, dry, and sprinkle with seasoned flour.
- Heat the oil in a frying pan, add the onion and the chicken joints.
- Simmer, turning the joints, until the onions are light gold.
- Take a casserole [dish] and place in it a layer of chicken joints and onion, followed by a layer of mushrooms and carrots, then a layer of sliced potatoes. (These vegetables can be varied according to personal taste.) 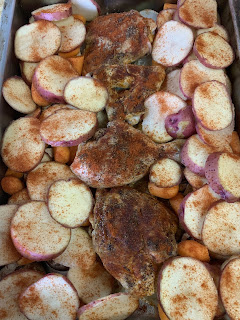 - Sprinkle with paprika, salt and pepper to taste.
- Make a slightly thickened white sauce by adding a little cream to the milk, and pour over the contents.
- Put a lid on the casserole, and place in a cool oven (300 degrees F, gas 2) for about 2 1/2 hours.

That “gas 2” part is a British thing—the heat setting for old-fashioned gas ovens, according to Jenny, who is British. 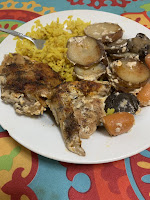 Looking back, I think I was more nervous about getting this recipe “right” than I should have been, because I omitted one step: I forgot to flour the chicken. When I posted a pic of the finished dish to the Facebook group I belong to for sharing dinner photos, I was told lack of flour can lead to the milk and cream separating. Fortunately, I had chicken parts to spare, so I went back and redid just the chicken, flouring it before putting in the pan.

My mother was my guinea pig for this recipe. She liked the dish the first time, even with the curdled milk, and I have to admit, so did I. It wasn’t that big an impediment.

Would I make this again? Eh, I doubt it, at least not this version. I’d probably find a modern recipe of chicken paprika instead and work from that. The longer cook time is nice in that it makes the chicken very tender and flaky, which my mother liked, but other versions of this recipe don’t require the milk and cream combo (I mostly saw sour cream), and are cooked at a higher temperature for less time. I would also use egg noodles as a side. Virginia was horrified to see I paired potatoes with rice, but when you’ve got a great big pound bag of rice, you tend to use it a lot. Keep in mind I’m still very much an amateur when it comes to cooking.

So that’s it. At least I didn’t use cayenne instead of paprika!