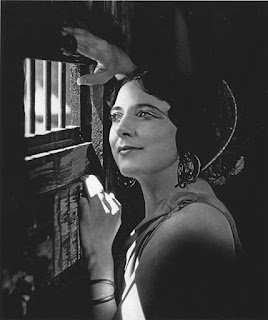 I’ve discussed Cecil B. DeMille here before—the blockbuster filmmaker with the moralistic streak. The guy whose films condemn sin but show you lots of it, in detail. A silent adaptation of Carmen seemed like a good fit for him—it’s not a Biblical story, but there are lots of people behaving badly in it.

Georges Bizet’s opera was first performed in 1875 in Paris, and it was plenty shocking for its time. The tale of the gypsy temptress and the two dudes whom she seduces didn’t catch on until it played outside France; by the time it returned home, in 1883, its fame grew. It has been adapted and readapted for film lots of times—I wrote, for example, about the contemporary all-black version, Carmen Jones. DeMille’s version was one of the very first for the screen, made forty years after its debut.

Carmen was one of thirteen films DeMille made in 1915, including the crime-of-passion drama The Cheat. His version of Carmen is actually based on the original novella, since the libretto was under copyright at the time. His brother William wrote the screenplay. The version I watched had the libretto on the soundtrack. I was surprised that I recognized some of the songs, but I guess they’re pretty famous.

Opera singer Geraldine Farrar (not to be confused with Geraldine Ferraro) played Carmen, and for 1915, she was pretty sexy. Carmen, let’s face it, is a bitch, but she’s a fascinating bitch. She charms Spanish soldier Wallace Reid because it’s her job (to distract him from a smuggling ring going on under his nose) and cock-teases bullfighter Pedro de Cordoba because... she can? From the get-go, she’s utterly confident of her abilities and she doesn’t suffer fools gladly, either: in one scene she gets in a vicious cat-fight with a woman who gives her static.

That same year, Raoul Walsh released his own version of Carmen, with Theda Bara, and Charlie Chaplin directed and starred in a Carmen parody called A Burlesque on Carmen, proving that the common phenomenon of similarly-themed movies coming out around the same time is older than most people think.
Posted by Rich at 7:00 AM