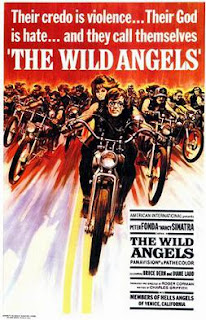 Roger Corman is still alive and making movies! This Variety piece from last December discusses his latest projects and how he’s adapted to the technological changes to the industry—and even during the quarantine, he’s encouraged others to keep making movies.

To go into his career as an independent producer-writer-director, including discussing the many film superstars who started out with him when they were nobodies, would take way too long, so let’s focus on one aspect of it: his association with indie production company American International Pictures.

Founded by Samuel Arkoff & James Nicholson in 1954, their mandate was finding low-budget films that could be released as double features for the burgeoning teen market. Their first release was a Corman production, The Fast and the Furious. (Fun fact: Corman licensed that title to Universal in 2001, and when the long-running sports car franchise became a hit, Corman got a tiny piece of the profits.)

Corman had spent the 60s making adaptations of Edgar Allen Poe stories with Vincent Price and even spent a little time at Columbia Pictures. Then one day he became aware of motorcycles. 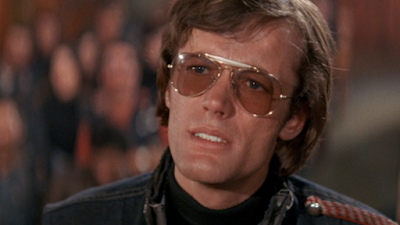 Marlon Brando rode a hog to box office glory in The Wild One way back in 1953, but biker flicks didn’t become a thing, at least not right away. The rise of the notorious Hells [sic] Angels in the 60s made motorcycle culture more prominent.

Drive on a highway long enough and sooner or later they may pass you by, in their leather jackets and sunglasses, the collective sound of their engines roaring in your ears. They’re perhaps more of a threat abroad than domestically, but either way, you’d be well advised to give them a wide berth if you see them.

Personally, I can’t stand motorcycles. Outside my house, I hear bikers dragging up and down a nearby street late at night on the weekends in warm weather and they’re always loud. Even now, in the midst of the quarantine, they do it. Drives me nuts. 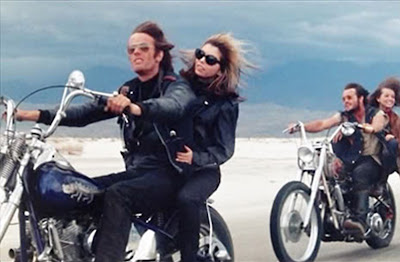 In college, I read Zen and the Art of Motorcycle Maintenance and that gave me a little insight on what it was like to ride a motorcycle, among many other things, though when I tried to reread it recently, it didn’t appeal to me in the same way. Maybe the bikers outside in my neighborhood killed the romance.

In 1966, Corman saw an article in Life about a biker funeral and something about it made him want to build a story around that idea. The screenplay of what would become The Wild Angels, by Charles B. Griffith (writer of, among other films, the original Little Shop of Horrors) was given an uncredited rewrite by future star filmmaker Peter Bogdanovich.

Peter Fonda, son of Henry, had developed a brief TV career mixed with a few feature films to this point before turning on, tuning in and dropping out: he was tight with the Byrds and met the Beatles through them; legend has it the line “I know what it’s like to be dead” in the song “She Said She Said” was a quote from Fonda on acid. 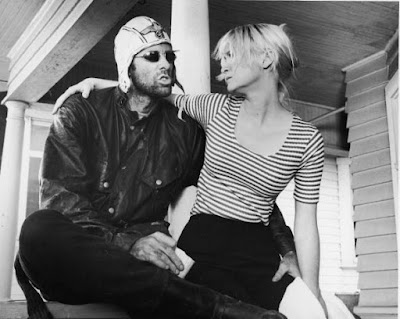 He was originally gonna be in what is now the Bruce Dern role, with George Chakiris as the lead, but Chakiris couldn’t ride a motorcycle, so Fonda took the lead instead—and a counterculture legend was born. Another offspring of a Hollywood icon, Nancy Sinatra, played Fonda’s girlfriend.

Angels was a hit, though I’d be hard pressed to explain why. Dern gets into a crash while outrunning The Man and gets caught anyway; Fonda, Sinatra and their buddies spring him from the hospital but he dies anyway; they insist on a formal funeral for him but it degenerates into an impromptu free-for-all anyway. It’s a thin plot with little in the way of insight as to why I should care about these people—Fonda’s famous speech notwithstanding. I guess you just had to be there to get it.

AIP made, or at least co-produced, more biker flicks, including The Glory Stompers, with Dennis Hopper; The Savage Seven (Penny Marshall’s first film) and Hell’s Angels on Wheels, with Jack Nicholson. Corman and Fonda moved on to other things, including the film The Trip, with Dern and Nicholson, plus Corman helped finance Bogdanovich’s first feature, Targets. 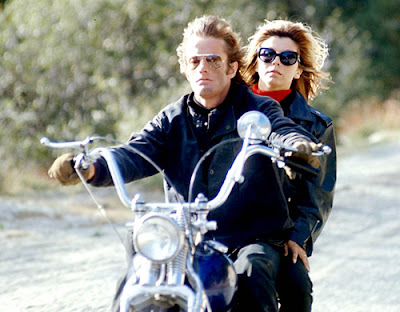 Two other things came out of The Wild Angels: the first was Laura Dern, who was apparently conceived during this movie, when Bruce Dern met Diane Ladd. The other...


“I was a little bit loaded, and I looked at... a photograph from The Wild Angels of me and Bruce Dern on a chop,” [Fonda] recalled. “Suddenly, I thought, that’s it, that’s the modern Western; two cats just riding across the country... and maybe they make a big score, see, so they have a lot of money. And they’re gonna cross the country and go retire to Florida... When a couple of duck poachers in a truck rip them off ‘cause they don’t like the way they look.”*

...was Easy Rider. But that’s another story.