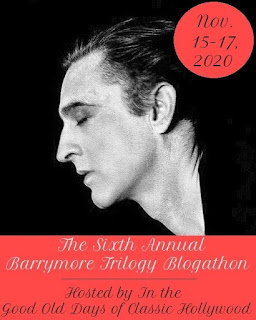 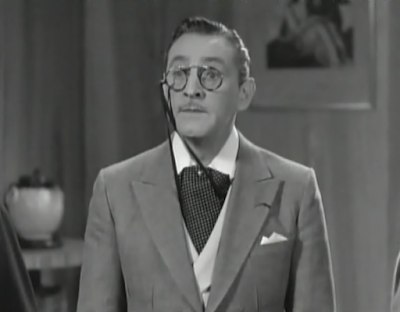 They called him “The Great Profile”—he made a movie by that name too—though I’ve looked and looked and I can’t see what was so special about his profile. Aquiline nose, thin lips, sturdy chin, I see all of that, but you could say that about lots of other men. I guess it was a cultural thing no one cares about anymore.

I don’t have anything against him. He was fine in the other films I’ve seen him in, but I never thought of him as being over and above other actors. I don’t think he’s better than, say, Spencer Tracy, for instance. In fact, I prefer Lionel—but maybe I haven’t seen enough of John’s films.

Not only has John played himself in movies, so have others: WC Fields, Fredric March (a disguised version), Errol Flynn, and Christopher Plummer, among others, so obviously there was something to his legacy that inspired familiarity, kinda like when someone imitates Bogart or Cagney or Brando. 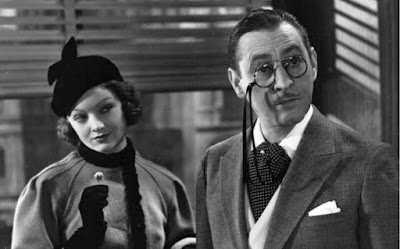 John was a stage actor for years before entering film, where much of his reputation was built. Unfortunately I can’t see him in this context; perhaps if I could, I’d appreciate him more. As a silent film actor, he also excelled; his celluloid portrayals of Hamlet, Jekyll & Hyde and Richard III were probably the definitive versions for those who never saw him on a stage.

When sound came to the movies, John signed with Warner Bros. at first, then MGM, plus he made some films at RKO during this time. It was at RKO that he made today’s subject, Topaze, produced by David O. Selznick, an adaptation of a play.

In France (though, of course, the principal actors don’t bother with accents), a meek schoolteacher is too good at his job for the likes of the aristocratic mother of a brat, which leads to his dismissal—until he’s snatched up by the father to help promote his sparkling water, unaware that it’s a subpar product. 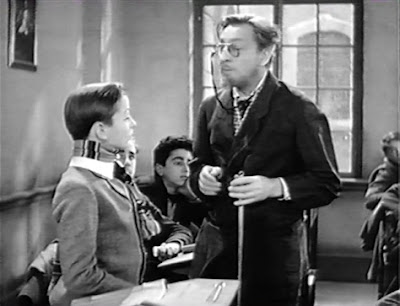 John reminded me of Lionel in his portrayal of Topaze: his tone of voice, some of his mannerisms, were reminiscent of Lionel in Grand Hotel, made a year earlier. I imagine the two of them were probably competitive, each trying to outdo the other.

I was more interested in the subplot about the baroness who got Topaze fired because he wouldn’t give her brat a passing grade. Later in the movie they meet under different circumstances and Topaze makes a feeble attempt to disguise himself. She doesn’t recognize him, which I didn’t buy.

Topaze had some funny moments, but it didn’t have as much of a satirical bite as other, later films like It Should Happen to You (a guileless innocent caught up in the cynical world of advertising) or Being There (a guileless innocent used as a pawn by others but remains uniquely himself). It was a nice idea, but ultimately not that interesting.

Myrna Loy is wasted in this movie as the mistress of the sparkling water baron. Anybody could’ve played her role.