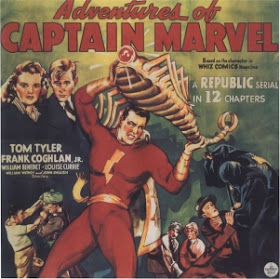 In anticipation of the Shazam! movie coming out in April, I thought I'd spend Saturdays this month taking a look at the last time the superhero Captain Marvel appeared on the big screen (not to be confused with the upcoming Marvel movie with Bree Larson), in one of the most celebrated serials in film history. At one point CM was as big as Superman or Batman. He's one hero who definitely deserves the Hollywood treatment.

A brief primer: Captain Marvel was created in 1939 by CC Beck and Bill Parker in Whiz Comics, published by Fawcett. Young Billy Batson, an orphan child, gets chosen by the ancient wizard Shazam to be his super-powered envoy on Earth, with abilities drawn from historical and mythological figures throughout human history, fighting evil.

Republic Pictures were known for their serials as well as their Westerns and B pictures. John Wayne started out there, as did Roy Rogers and Gene Autry. They adapted CM for the big screen because Superman was unavailable.

This will be my first exposure to an old-time theatrical serial. Who's got the popcorn?


CHAPTER 1: "Curse of the Scorpion"

So they changed the origin slightly, and not for the better. An archeological expedition to Siam goes awry when the team of mostly white dudes violate a sacred temple after being explicitly warned that a curse would befall them if they did.

Billy, a teenager here, refuses to go along with the grave robbing, which is why the ancient guardian of the temple, Shazam, bestows upon Billy the power of Captain Marvel, to ensure the curse doesn't harm innocent people.

The natives fight the white dudes and the British army, CM fights the natives(?), and some of Billy's friends get in danger.


The white dudes here feel entitled to take the temple artifacts, and why shouldn't they? They're colonizers; they're used to bossing "lesser" cultures around: planting their flag, moving in without an invitation and taking what they want. I wanted them to lose so badly.

As for the Siamese, played by white guys of course, did they not recognize CM as the embodiment of their cultural heritage being turned against them? Then again, maybe Shazam doesn't belong to them; his name is an acronym derived from other cultures, none of them Siamese.

For that matter, shouldn't CM, empowered with the wisdom of Solomon, recognize he's defending the wrong side? It's only the first chapter and already I find myself uncomfortable with this story.

That said, the cinematography is decent and the set design is quite good. It looks like they had a bit of a budget at their disposal for a serial. The acting is nothing to write home about, but it's tolerable.

Frank Coghlan Jr. plays Billy as gee-whiz as you'd expect, though he's also not afraid to fight when it's called for. As CM, Tom Tyler says very little, which I found disappointing.

CM rescues Billy's friends and the archaeologists escape with pieces of an important artifact: five lenses from an idol of a scorpion, that when arranged in a certain order, can use sunlight to transmute objects into gold.

They split them amongst themselves, so no one person can bear the responsibility for them, but one of them, under the masked guise of the Scorpion (think Cobra Commander but less over-the-top), has the idol and wants all the lenses for himself. He secretly kidnaps Dr. Carlyle, one of the archaeologists, and arranges an exchange with the others for his lens. Some of his goons handle the exchange, unaware the box they have is empty.

Billy, as CM, follows them back to their hideout, where Dr. Carlyle is, and in the ensuing fight, CM falls into a deathtrap involving... well, take a guess.

The recap is handled well — title cards with images of the characters — and they really do pick up where the previous one left off, no last-second cheats like the kind that pissed off Annie Wilkes as a kid.

CM escapes the deathtrap and saves Carlyle, but the bad guys escape. Carlyle claims he knows who the Scorpion is before he passes out.

Plucky secretary Betty is sent by her boss, Malcolm, to retrieve Carlyle's lens but the Scorpion gets wind of this and his goons kidnap her. CM rescues her, but not before the goons get the combination to Carlyle's safe, which contains the lens. Billy pursues them in his biplane (?), but the Scorpion's men plant a time bomb in it and cut the radio wires.

Neither the good guys nor the bad guys seem amazed at the sight of a man in a funny costume who can fly and is impervious to bullets. You'll see reaction shots of others who see CM in action, but he might as well be Jimmy Cagney for all they care! And CM's lack of speech makes no sense. He can talk, he just doesn't.

Also, one would think a secret identity would be superfluous, since CM and Billy are two different people, yet after he saves Betty, CM changes back to Billy before checking on her.

I'm starting to get into the story. The cliffhanger endings are tantalizing, even though you know it's not The End. The five credited screenwriters pace the action well, not that this story is Die Hard or anything. Each segment is about 16-17 minutes, so there's little room for characterization. If you tried to chop up a modern action movie into similarly-sized segments, it probably wouldn't work.

Plus I think I know who the Scorpion is too.